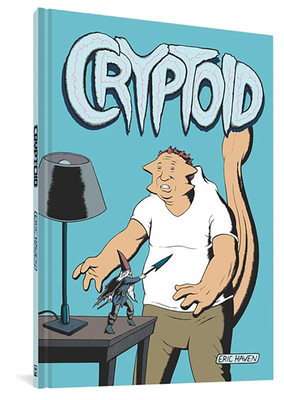 This is a literary collection of interconnected comics stories about monsters — giant monsters, tiny monsters, robot monsters, cosmic monsters — some of whom work for the benefit of humankind, others as agents of chaos.

Taking place over different planes of existence, trippy and deadpan, the stories share a perspective seen from a world gone horribly wrong. Worlds behind worlds are revealed — including our own.

Eric Haven is an Emmy-nominated producer (Mythbusters) and Eisner Award-nominated cartoonist from Oakland, California. He has contributed to The Believer and Kramers Ergot.
Haven is a comics parodist of the highest order.
— Booklist

His draftsmanship evokes some sort of sweet spot between '70s underground comix, '90s alt-comics, and classic serialized strips featuring strange creatures and square-jawed, Flash Gordon types. But his sensibilities, even more than the glorious art, are the real selling point. I don't think I've come across such an eclectic mix of hilarity and horror and wonderment.
— Under the Radar

Eric Haven takes an idiosyncratically weird approach to the horror genre of the Weird to produce a hybrid graphic novella that belongs to no genre but his own.
— PopMatters