I Am Not Okay With This: (Netflix Series Tie-In Edition) (Paperback) 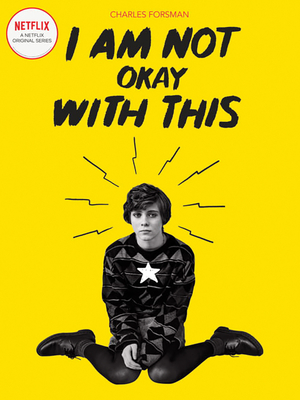 I Am Not Okay With This: (Netflix Series Tie-In Edition) (Paperback)

A tie-in with the Netflix series adaptation starring Sophia Lillis (It), from the director of The End of the F***ing World and production team behind Stranger Things.

Sydney seems like a normal, rudderless fifteen-year-old freshman. She hangs out underneath the bleachers, blasts music in her friend's car, and gets into arguments with her annoying little brother. But she also has a few secrets she’s only shared in her diary: how she's in love with her best friend, the bizarre death of her war veteran father, and excruciatingly painful telekinetic powers that keep popping up at the most inopportune times. Charles Forsman once again expertly channels teenage ethos in a style that evokes classic comics strips while telling a powerful story about the intense, and sometimes violent, tug of war between trauma and control. I Am Not Okay With This tackles familial strain, sexual confusion, and PTSD in Forsman's signature straight-faced-but-humorous style and firmly stakes his place among the world's best cartoonists.

Charles Forsman's The End of the F***ing World graphic novel has been adapted into a  critically acclaimed television series that is distributed by Netflix. He is also a graduate of the Center for Cartoon Studies. He lives in Hancock, Mass.
Forsman's
conclusion exerts a continued, nagging pressure once the book is through,
hovering on the edge of your consciousness... It may be the only way to wind up
a story that lurches so unpredictably from the ordinary to the ominous.
— NPR Books

A
vision of what the X-Men mythology might be like for a mutant who never got
that reassuring visit from Professor X. This rocky journey it is as insightful
as it is brutal.
— Vulture

Forsman does a great job on both the writing and art. His writing is terse and quick, and it provides for many emotional wallops. Similarly, the artwork is simple, yet it makes it completely accessible.
— Forces of Geek