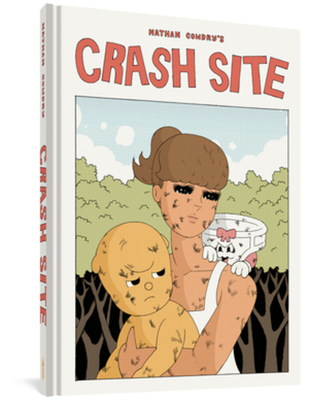 A black comedy of high order, this debut graphic novel doubles as a psychological drama set in the heart of the Amazon jungle and featuring an absurdist cast of drug traffickers — including a young woman, a codependent talking dog, and an anthropomorphic pair of sociopathic underwear.

Crash Site, the debut graphic novel from British cartoonist Nathan Cowdry, is the story of Rosie, a young drug trafficker who uses her lovelorn talking dog, Denton, to mule drugs across international lines. When Rosie and Denton’s return flight to England goes down and they find themselves stranded in the Amazon basin (with fifty grand worth of coke in Denton’s stomach), well, getting busted becomes the least of their concerns as they try to find their way out. Did we mention that Rosie is also wearing a pair of anthropomorphic underwear she calls Pants Dude, and that he may have other plans for her and Denton?

Crash Site is a darkly funny, character-driven graphic novel that calls to mind the sense of humor of Simon Hanselmann, with a Tarantino-level appetite for gratuitous acts of sex and violence and use of flashbacks to allow the story to unfold. Cowdry’s confident storytelling skills, attractive artwork, and sense of comedic timing makes Crash Site a winning recipe for fans of adult humor.

NATHAN COWDRY is an illustrator and cartoonist from Brighton, England. His work has been featured on It’s Nice That and appeared in Now: The New Comics Anthology.
Without hyperbole: Nathan Cowdry is a godsend to true alternative comics. Crash Site is gripping, transgressive perversion of the highest order. An entrancing, Solondzian nightmare run through a blender with a pile of ecchi manga and a full English breakfast. Chef's kiss. Yes, please.

It's a singular, joyously bizarre ride. ... The shock aspect may be what draws the curious to Crash Site in the first instance, but it's Cowdry’s precision and craftsmanship which is what'll bring them back.
— Broken Frontier