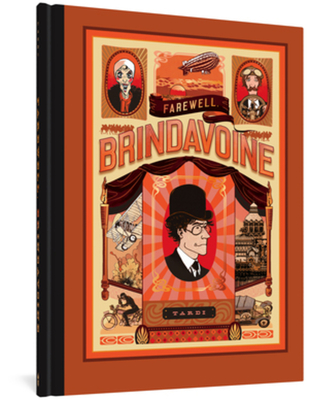 By Tardi, Jenna Allen (Translated by)

Paris, 1914. In one auspicious night, Lucien Brindavoine’s humdrum life is thrown into wild disarray. Out of the blue, a strange old man visits Brinvadoine’s flat and implores him to go to Istanbul to seek his destiny. No sooner are these fateful words spoken than a shot is fired through the window and the man is murdered by a mysterious assailant. Thus kicks off a madcap adventure wherein the mild-mannered dilettante Brindavoine races to the Middle East — by boat, plane, and jeep —with cutthroat assassins threatening him at every turn. After much ado, he encounters an iron city in the desert where an eccentric American billionaire will decide his fate.

Tardi is a pioneering, internationally award-winning European cartoonist. His Adele Blanc-Sec series was adapted into a feature by Luc Besson, and the animated film April and the Extraordinary World was inspired by his cartooning. He lives in Paris with his wife, the singer Dominique Grange, and their cats.

Jenna Allen is a freelance translator based in Colorado.
A fascinating artifact of Tardi's first forays as a storyteller ... a spectacular showcase for his visual storytelling.
— Publishers Weekly