The Reddest Rose: Romantic Love from the Ancient Greeks to Reality TV (Paperback) 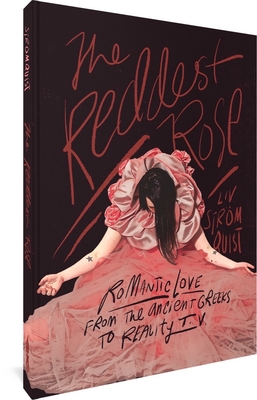 The Reddest Rose: Romantic Love from the Ancient Greeks to Reality TV (Paperback)

The internationally acclaimed activist follows up her satirical work of graphic medicine with this collection of humorous comics essays about how historical and societal shifts have altered — and perhaps destroyed — "romantic love."

The deceptively simple through-line for Swedish media personality and activist Liv Strömquist’s The Reddest Rose is the question: Why does Leonardo DiCaprio date an endless string of 20-something models? Her answer — in the form of this collection of well-researched, humorous comics essays — tracks how philosophers and artists, from the Ancient Greeks to Beyoncé, conceptualized romantic love. Strömquist’s signature characters, drawn in a flat, blocky style, ask each other questions and offer sharp commentary as they guide readers throughout history and the change in societies' values, from showing love/loving to getting love/being loved. (Poet Hilda "H.D." Doolittle — who was so love-stricken by a man taking off his glasses that she believed they viewed dolphins together in another dimension — lends the book its title.) Lord Byron, Socrates, Byung-Chul Han, Ezra Pound, Slavoj Žižek, Lou Andreas-Salomé, Ariadne, and many others have cameos. For the first time in English, in The Reddest Rose, Strömquist wonders: in a rationalist, consumerist world, can romantic love survive?

Liv Strömquist was born in Sweden and lives in Malmö. She is a radio host with a degree in political science. An activist, her left-leaning, award-winning comics have been published in zines and magazines. Fruit of Knowledge has  sold 40,000 copies in Sweden, been adapted for the stage, and has been published worldwide.

Melissa Bowers is a translator and editor. She lives in Seattle.
[On Fruit of Knowledge]: Veers from the educational to the whimsical...

If her strips are clever, angry, funny and righteous, they're also informative to an eye-popping degree.
— The Guardian