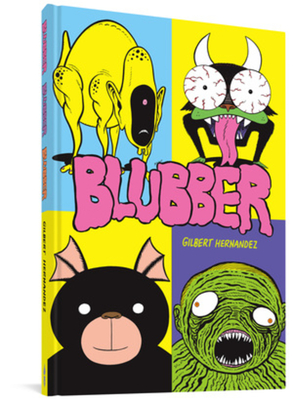 Drawn from the first five issues of Gilbert Hernandez's comic book series Blubber, an absurdly X-rated showcase for the most surreally transgressive of Hernandez's short stories, weirdos (Blubberoo, Mr. Elvis, John Dick, the Mentor), creatures (the Mau Guag, Doogs, and Orlats…), and anthropomorphs (the Cloarks, the Kekeppy) visit places where most comics fear to go. Blubber veers between an absurdist satire of porn (and occasionally nature documentaries) and a celebration of unbridled hedonism, serving as a defiant provocation to those unable to appreciate the difference between cartooning and obscenity. As R. Crumb said, "It's only lines on paper, folks!" It is also a howlingly funny book, filled with a rogues gallery of colorful comic book monsters (the Pollum, the Junipero Molestat, the mythical Forest Nimmy) and characters (T.A.C. Man, Mr. Hippy, Padre Puto, the Snowman, Baron Mungo, Red Tempest) that echoes the sheer visual imagination of Jack Kirby.

Gilbert Hernandez was born in 1957 in Oxnard, California, and is considered one of the greatest living comics writer-artists in the world. In 1982, Hernandez co-created, along with his brothers Mario and Jaime, the ongoing, iconic, internationally acclaimed comic book series Love and Rockets, one of the greatest bodies of work the medium has ever seen. In addition to his work on Love and Rockets, its spinoffs, and side series, Hernandez has released a prodigious amount of original graphic novels and miniseries, such as Sloth, Bumperhead, and Marble Season. He also collaborated with Darwyn Cooke on The Twilight Children for DC. He was inducted into the Will Eisner Hall of Fame in 2017 and is the recipient of a Fellow Award from United States Artists and a PEN Center USA’s Graphic Literature Award for Outstanding Body of Work. Hernandez lives in Ventura, CA, with his wife and daughter.
Hernandez is one of the great craftsmen of modern comics. ... Here, [he] offers a menagerie of weird invented monsters — like the Pollum, the Junipero Molestat, the mythical Forest Nimmy — engaged in unspeakable and strange acts.
— New York Times Book Review

Open-minded adult audiences might thrill to watch Hernandez (one of the comic book medium's most revered storytellers) allow his imagination to run wild, without restrictions.
— Library Journal

Plot, as can be the case in Gilbert Hernandez's more perverse work, is optional here: your eyes are immediately drawn to whatever extreme depiction of sexual deviancy is filling up the page.
— The Comics Journal

Hernandez has become the medium's David Lynch or Guy Maddin, rolling his personal obsessions and freewheeling abstractions into stories that present as pulp, then take some very weird turns.
— The A.V. Club

Every writer should be so lucky to have the imaginative chops that Hernandez shows.
— Southwest Review