The Nurture Effect: How the Science of Human Behavior Can Improve Our Lives and Our World (Paperback) 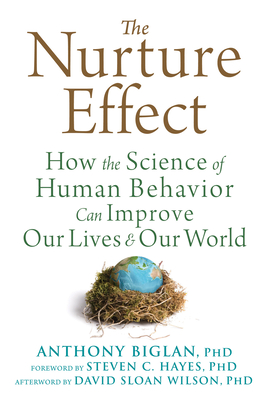 The Nurture Effect: How the Science of Human Behavior Can Improve Our Lives and Our World (Paperback)


Special Order—Subject to Availability
Anthony Biglan, PhD, is a senior scientist at Oregon Research Institute, and a leading figure in the development of prevention science. His research over the past thirty years has helped to identify effective family, school, and community interventions to prevent the most common and costly problems of childhood and adolescence. He is a leader in efforts to use prevention science to build more nurturing families, schools, and communities throughout the world. Biglan lives in Eugene, OR. Foreword writer Steven C. Hayes, PhD, is Nevada Foundation Professor in the department of psychology at the University of Nevada. An author of thirty-four books and more than 470 scientific articles, he has shown in his research how language and thought leads to human suffering. He cofounded acceptance and commitment therapy (ACT)--a powerful therapy method that is useful in a wide variety of areas. Hayes has been president of several scientific societies and has received several national awards, including the Lifetime Achievement Award from the Association for Behavioral and Cognitive Therapies. Afterword writer David Sloan Wilson, PhD, is president of the Evolution Institute and SUNY distinguished professor of biology and anthropology at Binghamton University. He applies evolutionary theory to all aspects of humanity, in addition to the biological world. His books include Darwin's Cathedral, Evolution for Everyone: How Darwin's Theory Can Change the Way We Think About Our Lives, The Neighborhood Project, and Does Altruism Exist?