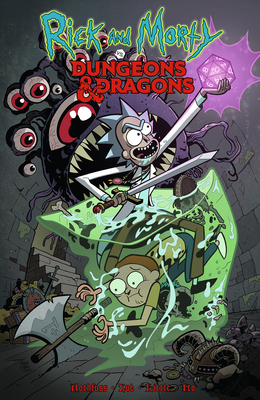 
Not On Our Shelves—Ships in 1-5 Days
You've got to--belch!--roll for initiative, Morty!

Two pop-culture juggernauts are teaming up and neither multiverse is prepared for what comes next!

When Morty sees a cute girl at school playing Dungeons & Dragons, he asks Rick to show him the ropes, only to discover that his grandfather is a veteran gamer. Next thing he knows, the entire family has been pulled into a campaign that escalates from virtual D&D simulations to alternate universes governed by the rules of the game. And as it turns out, Rick isn't the only one who knows his way around a d20.

Collects the complete four issue miniseries.
Patrick Rothfuss is the bestselling author of The Kingkiller Chronicle. His first novel, The Name of the Wind, won the Quill Award and was a Publishers Weekly Best Book of the Year. Its sequel, The Wise Man's Fear, debuted at #1 on The New York Times bestseller chart and won the David Gemmell Legend Award. His novels have appeared on NPR's Top 100 Science Fiction/Fantasy Books list and Locus' Best 21st Century Fantasy Novels list. Pat lives in Wisconsin, where he brews mead, builds box forts with his children, and runs Worldbuilders, a book-centered charity that has raised more than six million dollars for Heifer International.

Jim Zub is a writer, artist and art instructor based in Toronto. He's worked for a diverse array of publishing, movie and video game clients including Marvel, DC Comics, Hasbro, Cartoon Network, and Bandai-Namco. He juggles his time between being a freelance comic writer and Program Coordinator for Seneca College's award-winning Animation program. His current projects include Dungeons & Dragons for IDW; Thunderbolts, the return of Marvel's villainous superhero team; and Wayward, his creator-owned series about teens fighting Japanese mythological monsters.
"Rick and Morty vs. Dungeons & Dragons is a perfect synthesis of the best parts of both worlds." —ComicBook.com

"A crossover made in heaven." —AiPT!

"The nerdiest of us should be nothing short of grateful for this series." —Bubble Blabber

"Rick and Morty vs. Dungeons and Dragons surpasses expectations, becoming not just a fun crossover but also an excellent adventure, a retrospective on D&D’s history, and a treatise on why we game at all." —ComicBook.com

"A high energy, hilarious and cleverly written concoction. It is a strong recommendation for fans of high quality comedy and a must read for any Dungeons & Dragons fans or players.'" —The Brazen Bull

"Whether you’re a player of D&D or just a swords and sorcery fan, you’ll love this book for the signature Rick and Morty humor mixed up with nerd-tastic magic." —CBR