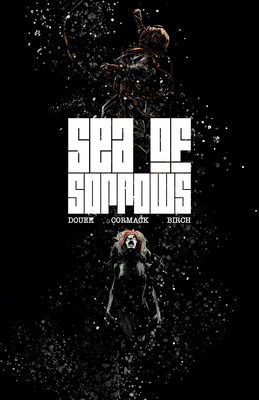 
Not On Our Shelves—Ships in 1-5 Days
Plunge headfirst into the icy waters of dread in this graphic novel of deep sea adventure with a horrific twist!

In the aftermath of the Great War, the North Atlantic is ripe for plunder by independent salvage crews. When a former naval officer hires the SS Vagabond, he leads the ship to a sunken U-boat, and a fortune in gold. Tensions mount as the crew prepares to double cross each other, but the darkness of the ocean floor holds deeper terrors than any of them have bargained for!

From the creative team behind the horror graphic novel Road of Bones, comes an all-new tale of bone-chilling terror!

Collects the complete five issue series.
Rich Douek became infatuated with comics at a young age, using his allowance and whatever spare change he could find to buy them off the rack at the candy store near his home in NYC. Years later, after building a successful career in copywriting (and filling up quite a few long boxes), he was able to realize a lifelong dream by publishing Gutter Magic, his first original comic, through IDW and Comics Experience. Since then, he has been pursuing further writing opportunities in the world of comic books, and beyond.

Alex Cormack is an illustrator and animator whose works include the critically acclaimed SINK from ComixTribe Publishing, RED DOG from 451 media, the official prequel to the motion picture HARDCORE HENRY, HARDCORE AKAN from STX Entertainment and Bliss on Tap Publishing, and ROAD OF BONES from IDW Publishing. He has also done work for Adult Swim, Oni press, and KRS Comics.
"Sea of Sorrows is a pitch perfect slow burn. A tense read from beginning to end. The creators dial that feeling up with each turn of the page." —Horror DNA

"Rich Douek has set himself firmly at the top of the heap as the historical horror writer of our generation. What turns up on the page is just so effortlessly good, every time." —Big Comic Page

“Phenomenal. The art and the writing take a solid concept and twist it into a horrifying experience.” —Comics Bookcase

"Brutally efficient storytelling and art that drowns you with a moody atmosphere. A must-buy for horror fans." —Monkeys Fighting Robots

"If you're a fan of historical horror, this is a title you might find yourself getting hooked to!" —Impulse Gamer

"Rich Douek's rocket ship is going right to the moon, he's become the master of horror comics." —The Word Bros