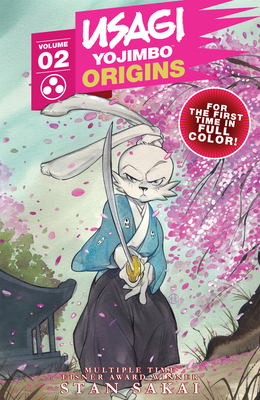 This is book number 2 in the Usagi Yojimbo Origins series.

Usagi's cast of characters continues to expand with the first appearances of his longtime tokage (lizard) companion, Spot, and his greatest nemesis, the demented, seemingly unkillable wolf samurai, Jei! The bonds of family and the bounds of honor are tested as Usagi helps an elderly mother face the villain her son has become. When the blind swordspig Zato-Ino comes back for revenge, can Usagi still triumph after the playing field is leveled? All this, plus more adventures in anthropomorphic Edo Japan!

Begining with these early issues find out why this series has won six Eisner Awards, two Harvey Awards, an American Library Association Award and has been called by Stan Lee, "One of the most original, innovative, well-executed comic books anywhere to be found."

Wanderer's Road collects the stories "The Tower," "A Mother's Love," "The Return of the Blind Swordspig," "Blade of the Gods," "The Tea Cup," and "The Shogun's Gift" from Usagi Yojimbo Vol. One, issues #7-12, originally published in black and white by Fantagraphics from March to October 1988.
Stan Sakai was born in Kyoto, Japan, and grew up in Hawaii. Stan received a fine arts degree from the University of Hawaii and furthered his studies at the Art Center College of Design in Pasadena, California.

Stan's creation, Usagi Yojimbo, first appeared in the comic book Albedo Anthropomorphics #2 in 1984. Since then, Usagi has been on television as a guest of the Teenage Mutant Ninja Turtles and has been made into toys, seen on clothing, and his stories have been collected in more than three dozen graphic novels and translated into 16 languages.

Stan is the recipient of a Parents' Choice Award, an Inkpot Award, an American Library Association Award, two Harvey Awards, five Spanish Haxturs, eight Will Eisner Awards and two National Cartoonists Society Silver Reubens. In 2011 Stan received the Cultural Ambassador Award from the Japanese American National Museum for spreading Japanese history and culture through his stories. Stan was awarded the inaugural Joe Kubert Excellence in Storytelling Award in 2018 and was inducted into the Will Eisner Hall of Fame in 2020. Stan, in partnership with Gaumont USA, is currently developing an Usagi animated series for Netflix.