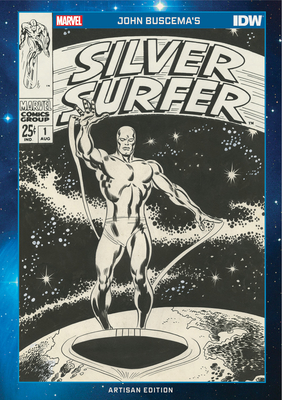 
Not On Our Shelves—Ships in 1-5 Days
Considered by many to be one of the pinnacles of Silver Age comic book art--now presented in IDW’s critically acclaimed Artisan Edition format--you’ve never truly seen Buscema’s art until now!

An essential component of The House of Ideas, John Buscema’s talented hand graced the pages of Marvel’s most iconic characters for over four decades, working on The Avengers, Thor, The Fantastic Four, and The Amazing Spider-Man just to name a few.

As with all Artisan Edition books, nearly every page in this volume has been scanned from the original art, enabling the reader to clearly see all the little nuances that make original art unique and fascinating—blue pencil notations, margin notes, whiteout, and so much more. This will be a must-have for all fans and students of classic comic art!

John Buscema was a renowned comic book artist for more than 50 years. He is primarily know for his work on The Avengers, Thor, Fantastic Four, Conan, and the Silver Surfer. Buscema’s superb drawing ability earned him a reputation as an artist's artist, and he has been called the Michelangelo of Comics. His influences include Cartoonists Hal Foster (Tarzan and Prince Valiant), Alex Raymond (Flash Gordon), Milton Caniff (Terry and the Pirates), as well as many of the great early 20th century illustrators like N.C. Wyeth, Norman Rockwell, and Dean Cornwell. Buscema was inducted into the Will Eisner Comic Book Hall of Fame the same year he died.