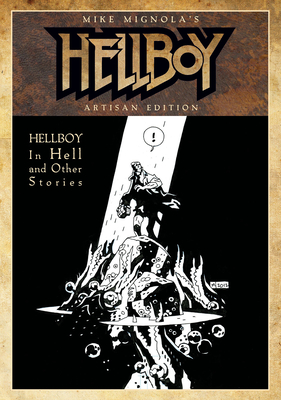 
Not On Our Shelves—Ships in 1-5 Days
See Mike Mignola’s art as you never have before–presented in IDW’s Artisan Edition format!

Mike Mignola has been (and remains!) one of the preeminent comics creators of the past several decades. His career was already firmly established for his outstanding work on characters like Batman, Wolverine, a myriad of beautiful covers and more… And then came Hellboy. Mignola’s iconic creation struck a meteoric chord with fans from the very start and has not abated in the 25-plus years since the character’s debut.

This Artisan Edition features the first five issues of Hellboy in Hell as well as a wealth of historic supplementary material: the first three Hellboy stories–the two initial four-pagers, produced for promotional purposes, and the 10-page story from John Byrne’s Nextmen #21–plus The Corpse, and two other tales selected by Mignola for inclusion. Nearly every page has been scanned from Mignola’s original art and showcases the artist's gorgeous work as closely as possible to the physical page–this is a book for fans of great storytelling and students of the craft.

An Artisan Edition endeavors to mimic as closely as possible the experience of viewing the actual original art–for instance, corrections, blue pencils, paste-overs, all the little nuances that make original art unique. Unless you are holding Mike’s art in your hands, there is no way to better experience his original art.
Mike Mignola is best known as the multiple award-winning creator, writer, and artist of B.P.R.D. and Hellboy, but has fostered several other projects like The Amazing Screw-On Head and Baltimore with Christopher Golden. Although he began working as a professional cartoonist in the early 1980s, drawing "a little bit of everything for just about everybody"--including characters like Batman and Wolverine--he was also a production designer on the Disney film Atlantis: The Lost Empire. Mignola also acted as a visual consultant to Guillermo del Toro on Blade 2 and the film versions of Hellboy, which were broadly adapted by del Toro from the original comic series. Mike Mignola currently lives in southern California with his wife, daughter, and cat.