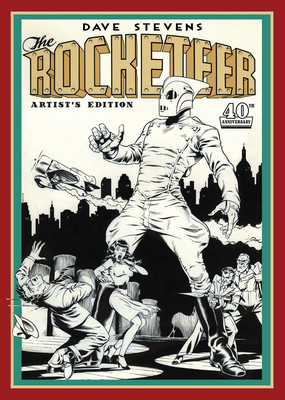 
Not On Our Shelves—Ships in 1-5 Days
(This book cannot be returned.)
Celebrate the 40th anniversary of the debut of The Rocketeer in comics with this beautiful book showcasing the art of one of comics' masters!

In April of 1982, The Rocketeer debuted as a backup feature from Pacific Comics. From those humble beginnings the artistry of Dave Stevens caught the imaginations of countless readers and became a worldwide sensation, even being turned into a big-budget feature film! And in 2009 when IDW launched its award-winning Artist’s Edition series, The Rocketeer was the inaugural release, even winning a coveted Eisner Award that year. The book quickly sold out and went into a second printing. Now, more than 10 years later, The Rocketeer is soaring back with a new 40th anniversary printing.

As with all Artist’s Editions, the art reproduced in this book has been meticulously scanned from the original art. Readers will be able to peruse these pages and see all the quirks and nuances that make original art so unique—blue pencil notations, white out, gradients in the ink, and so much more. Unless you were looking over Dave’s shoulder as he painstakingly drew these pages, this is your best chance to see the art of The Rocketeer as close to the originals as possible!

Dave Stevens was born in Lynwood, California on July 29, 1955. His career in comics began in 1975, assisting veteran artist Russ Manning on the syndicated Tarzan newspaper strip. Stevens went on to toil as a storyboard artist for Hanna-Barbara, DePatie-Freleng and Filmation animation studios, working on such programs as Super Friends and The Godzilla Power Hour. Later, Stevens was asked by Steven Spielberg to create presentation boards for Raiders of the Lost Ark. During the same period, Stevens storyboarded the groundbreaking music video Thriller for Michael Jackson and did production design for Jackson’s Victory Tour.

In 1982, Stevens debuted the feature for which he is best known, The Rocketeer. Initially appearing as a back-up feature in the second issue of an independent comic, the pulp-inspired story of Cliff Secord, a daring stunt pilot who finds an experimental rocket pack, became an instant sensation. The Rocketeer went on to star in his own comic book series, and in 1991 would become a well-received major motion picture from Walt Disney Studios.

Stevens’ lush figure work, particularly when rendering the female form, coupled with his elegant brush line, brought him much acclaim far beyond the confines of comic books. In particular, his breathy portrayals of Cliff’s girlfriend Betty, inspired by famed pin-up queen Bettie Page, helped revitalize interest in the ‘50s icon, a fact openly acknowledged by Page, who became close friends with Stevens in her final years.

On March 11, 2008, Dave Stevens lost a long battle against leukemia.