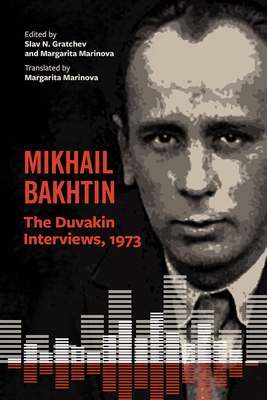 
Not On Our Shelves—Ships in 1-5 Days
Whenever Bakhtin, in his final decade, was queried about writing his memoirs, he shrugged it off. Unlike many of his Symbolist generation, Bakhtin was not fascinated by his own self-image. This reticence to tell his own story was the point of access for Viktor Duvakin, Mayakovsky scholar, fellow academic, and head of an oral history project, who in 1973 taped six interviews with Bakhtin over twelve hours. They remain our primary source of Bakhtin’s personal views:  on formative moments in his education and exile, his reaction to the Revolution, his impressions of political, intellectual, and theatrical figures during the first two decades of the twentieth century, and his non-conformist opinions on Russian and Soviet poets and musicians. Bakhtin's passion for poetic language and his insights into music also come as a surprise to readers of his essays on the novel. One remarkable thread running through the conversations is Bakhtin's love of poetry, masses of which he knew by heart in several languages. Mikhail Bakhtin: The Duvakin Interviews, 1973, translated and annotated here from the complete transcript of the tapes, offers a fuller, more flexible image of Bakhtin than we could have imagined beneath his now famous texts.

Published by Bucknell University Press. Distributed worldwide by Rutgers University Press.
SLAV N. GRATCHEV, MBA, PHD is an associate professor of Spanish at Marshall University in Huntington, West Virginia. He is the author or editor of several books, including The Polyphonic World of Cervantes and Dostoevsky.

MARGARITA MARINOVA, PHD is an associate professor of English and comparative literature at Christopher Newport University in Newport News, Virginia. She is a translator and author of Transnational Russian-American Travel Writing.

DMITRY SPOROV is chair of the department of oral history at Moscow State University’s Science Library and a distinguished historian. He is also the president of the Foundation for Research in the Humanities and the chief editor for the book series Let's Remember Moscow: 1930s and Let's Remember Moscow: 1940s, a unique collection of oral memoirs about Moscow.

"Bahktin is one of the giants of 20th Century social and cultural theory."
— Voice Literary Supplement

“Bakhtin was never interested in writing his memoirs, nor in making out of himself a work of art. Or even a good story. In his view, we have great novels for that. But Viktor Duvakin, who shared Bakhtin’s deep love of poetry, found just the right tone and timing to put his subject at ease. The result, in this full and fluent rendering of the taped sessions, is as close as we can come to the master’s nimble, irreverent, freely-roaming voice.”
— Caryl Emerson

“The Duvakin recordings were a surprise gift to Bakhtin scholars: a series of intimate but vigorous conversations, led by an expert interviewer, in which Bakhtin described his life and times in striking detail. Now available in a marvelously readable English translation, they are an invaluable resource for anyone interested in Bakhtin and his historical-cultural context, as well as anyone with an interest in the culture and cultural politics of the Soviet Union.”
— Ken Hirschkop

“This book is an extraordinary contribution to cultural and intellectual history. Bakhtin’s conversations with Duvakin capture a succession of epochs and dramatic events; they reveal a Bakhtin who is both vulnerable and sovereign, anchored in his time and breaking free of its constraints.”
— Galin Tihanov

While some readers may not relish working through the thicket of allusions and references that occasion these interviews, there are many rewards to be had for doing so, especially for intellectual historians of twentieth-century Russia, and for Bakhtin scholars everywhere. I recommend it highly.
— The Russian Review