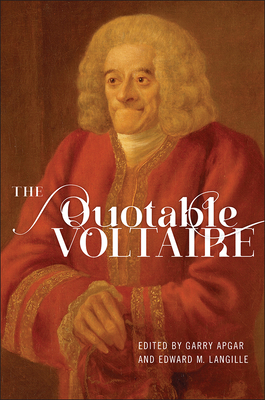 
Special Order—Subject to Availability
The author of more than 2,000 books and pamphlets, Voltaire (François-Marie Arouet, 1694-1778) was one of the most prolific writers of the eighteenth century, and also one of the wittiest and most insightful. This unique collection of over 800 of Voltaire’s wisest passages and choicest bons mots runs the gamut on topics from adultery to Zoroaster, in both English and French.

Drawing from a wide range of his publications, private letters, and remarks recorded by his contemporaries, The Quotable Voltaire includes material never before gathered in a single volume. English translations appear alongside the original French, and each quote is thoroughly indexed and referenced, with page numbers for both the first known publication edition of each entry and the most recent edition of Voltaire’s works. The book also features over 400 quotes about Voltaire, including commentary by eighteenth-century luminaries like Samuel Johnson, Catherine the Great, Casanova, and John Adams, as well as an eclectic assortment of modern-day personages ranging from Winston Churchill and Jorge Luis Borges to Mae West and Mike Tyson.

Lavishly illustrated with nearly three dozen images of Voltaire-related art, this collection opens with a scholarly essay that recounts the great man’s life and reflects on his outsized influence on Western culture. Whether you are a Voltaire scholar or a neophyte, The Quotable Voltaire is the perfect introduction to a brilliant mind.

GARRY APGAR is a cartoonist, art historian, author, and editor. A co-founder and current President of the Voltaire Society of America, he co-authored the documentary Voltaire and Jefferson: The Sage of Ferney and the Man from Monticello, and has previously written or edited four books, including L’Art singulier de Jean Huber: Voir Voltaire and most recently, Quotes for Conservatives.

EDWARD LANGILLE is a professor of French at St. Francis Xavier University in Nova Scotia. An internationally respected authority on eighteenth-century literature and culture, he has published many scholarly articles and books, including new scholarly editions of Voltaire’s Aventure indienne and Les Aveugles, juges des couleurs in Oxford University’s Œuvres complètes de Voltaire.
"Voltaire was one of history's wittiest and most incisive writers. His championing of tolerance and freedom is more relevant to today's world than ever. The editors have compiled Voltaire's greatest remarks into a fascinating and inspiring volume. Anybody who is interested in quotations, which means pretty much everyone on the planet, should devour this book."
— Fred Shapiro

“Garry Apgar and Edward Langille sifted through Voltaire’s voluminous correspondence and writings in order to compile this unique collection of material. Non-specialist readers will delight in Voltaire’s one-liners. Scholars in any number of fields will profit fromThe Quotable Voltaire on multiple levels, and will appreciate the precise bibliographical references and the contextual commentary accompanying many of the entries.”
— Servanne Woodward