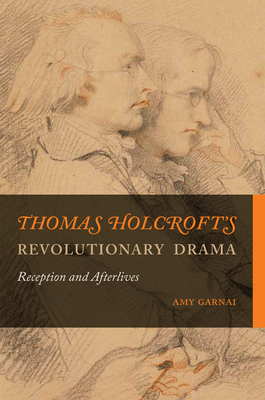 
Special Order—Subject to Availability
A key figure in British literary circles following the French Revolution, novelist and playwright Thomas Holcroft promoted ideas of reform and equality informed by the philosophy of his close friend William Godwin. Arrested for treason in 1794 and released without trial, Holcroft was notorious in his own time, but today appears mainly as a supporting character in studies of 1790s literary activism. Thomas Holcroft’s Revolutionary Drama authoritatively reintroduces and reestablishes this central figure of the revolutionary decade by examining his life, plays, memoirs, and personal correspondence. In engaging with theatrical censorship, apostacy, and the response of audiences and critics to radical drama, this thoughtful study also demonstrates how theater functions in times of political repression. Despite his struggles, Holcroft also had major successes: this book examines his surprisingly robust afterlife, as his plays, especially The Road to Ruin, were repeatedly revived worldwide in the nineteenth century.
AMY GARNAI teaches at the Kibbutzim College of Education in Tel Aviv, Israel. She is the author of Revolutionary Imaginings in the 1790s: Charlotte Smith, Mary Robinson, Elizabeth Inchbald, and her essays have been published in Women’s Writing, SEL, Eighteenth-Century Studies, The Wordsworth Circle, and The Review of English Studies.
“This striking book restores Thomas Holcroft—often granted a walk-on part in histories of radicalism in the 1790s or of the Jacobin novel—to his important place in theatre history. Garnai reveals a spectacular career in all its complexity and allows Holcroft the curtain call he has long deserved.”
— Jon Mee

“Indicted for high treason, intimately linked to 1790s radicalism, and idealized by Godwinian perfectibility, playwright Thomas Holcroft has been overlooked for too long. His extraordinary life is recovered here in Garnai’s fine study.”
— David Worrall

“Thomas Holcroft’s Revolutionary Drama foregrounds the radicalism and the drama in Holcroft’s striking playwriting career. Interweaving episodes from his biography, staged plays, and public reception of both, Garnai’s book demonstrates Holcroft’s centrality to 1790s London radical culture and what analyses of his plays contribute to discussions of performativity, censorship, and the burdens of cultural transmission in his day and ours. A timely revival of a largely unsung but masterful agitator.”
— Julie Carlson