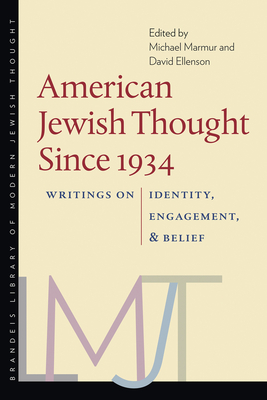 
On Our Shelves Now at:
What is the role of Judaism and Jewish existence in America? And what role does America play in matters Jewish? This anthology considers these questions and offers a look at how the diverse body of Jewish thought developed within the historical and intellectual context of America.

In this volume, editors Michael Marmur and David Ellenson bring together the distinctive voices of those who have shaped the bold and shifting soundscape of American Jewish thought over the last few generations. The contributors tackle an array of topics including theological questions; loyalty and belonging; the significance of halakhic, spiritual, and ritual practice; secularization and its discontents; and the creative recasting of Jewish peoplehood. The editors are careful to point out how a plurality of approaches emerged in response to the fundamental ruptures and challenges of continuity posed by the Holocaust, the establishment of the state of Israel, and the civil rights movement in the twentieth century.

This volume also includes a wide swath of the most distinctive currents and movements over the last eighty years: post-Holocaust theology, secular forms of Jewish spirituality, ultra-orthodoxy, American neo-orthodoxy, neo-Hasidism, feminism and queer theory, diasporist critiques of Zionism, and Zionist militancy. This collection will serve as both a testament to the creativity of American Jewish thought so far, and as an inspiration for the new thinkers of its still unwritten future.
David Ellenson is chancellor emeritus of Hebrew Union College-Jewish Institute of Religion and professor emeritus of Near Eastern and Judaic Studies at Brandeis University. He is the author of After Emancipation.

David Ellenson is chancellor emeritus of Hebrew Union College-Jewish Institute of Religion and professor emeritus of Near Eastern and Judaic Studies at Brandeis University. He is the author of After Emancipation.
"Marmur and Ellenson see a canon of American Jewish thought as already too entrenched and, like the canon of European Jewish thought, magnifying the influence of a small number of people. The editors thus bring in more of the intellectual progeny of thinkers who continue to cast a long shadow (in particular Heschel, Kaplan, and Soloveitchik) and many others debating the existential questions of American Jewish existence. ...[they] contribute to the process of expanding the “open canon” to make room for texts more reflective of the diversity of contemporary Jewish experience"
— American Jewish History

"Marmur and Ellenson’s excellent volume does not provide definitive answers for 21st-century American Judaism, but here are some of the voices we need to help fill those silences, some of the fragments out of which a new Judaism may be built."
— Jewish Review of Books

"This book would serve as an outstanding read for adult education classes or as an introductory text to American Jewish thought."
— Jewish Herald-Voice

"This collection will serve as both a testament to the creativity of American Jewish thought so far, and as an inspiration for the new thinkers of its still unwritten future."
— Hebrew Union College-Jewish Institute of Religion

"This display of erudition and all-round excellent portrayal of Jewish thought will provide much material for further examination and reflection for Jewish communities and by non-Jewish groups for a better understanding of American Judaism....Well recommended for a full appreciation of modern Jewish thought."
— American Jewish Library Newsletter

"Many selections from the 1950s to the 1970s will bring back memories to readers whose educations were shaped through interactions with these works and authors. Such scholars will be pleased to offer this collection to younger readers as a useful introduction to gems from texts that "everyone should know." . . . This is a solid resource for today's readers."
— Choice

“An exciting kaleidoscopic book about the Jewish experience in America—beginning with the optimism, rationalism, and naturalism of Reconstructionism, and ending today with the conflicted debates about Israel, the Holocaust, gender, and the possibility of creating a vital American Jewish identity for tomorrow.”

“Marvelous for teaching, for learning. A wealth of modern Jewish thought to enrich the reader and evoke new reflections and directions.”
— Rabbi David Wolpe, Sinai Temple

“Preeminent scholars Ellenson and Marmur have both defined and expanded the canon with diverse voices exploring the biggest ideas in American Jewish thought. An essential addition to every Jewish library.”
— Rabbi Angela W. Buchdahl, Central Synagogue