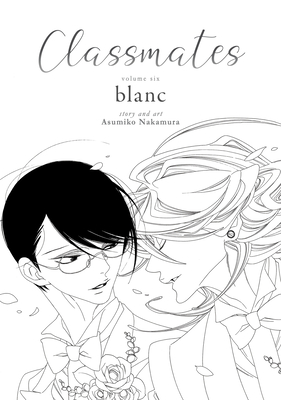 This is book number 6 in the Classmates: Dou kyu sei series.

A COMPLICATED KIND OF LOVE

Sajo is in his final year of university and trying to figure out what to do after graduation. As the pressure mounts, he suggests to Kusakabe that they take a break from each other. Kusakabe naturally takes this hard and throws himself into his music in an attempt to put their relationship behind him. When a family emergency brings Sajo back to town, can the two young men sort out their feelings and what they need from each other?

Contains blanc volumes one, two and booklet zero.
Asumiko Nakamura is an acclaimed manga creator known in English for Utsubora: The Story of a Novelist, Maiden Railways, her contribution to the Neo Parasyte f anthology, and her yuri series A White Rose in Bloom, but she's best known for her Boys' Love stories, especially Classmates: Dou kyu sei.