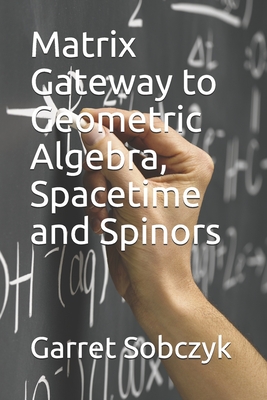 
Special Order—Subject to Availability
(This book cannot be returned.)
Geometric algebra has been presented in many different guises since its invention by William Kingdon Clifford shortly before his death in 1879. Our guiding principle is that it should be fully integrated into the foundations of mathematics, and in this regard nothing is more fundamental than the concept of number itself. In this book we fully integrate the ideas of geometric algebra directly into the fabric of matrix linear algebra. A geometric matrix is a real or complex matrix which is identified with a unique geometric number. The matrix product of two geometric matrices is just the product of the corresponding geometric numbers. Any equation can be either interpreted as a matrix equation or an equation in geometric algebra, thus fully unifying the two languages. The first 6 chapters provide an introduction to geometric algebra, and the classification of all such algebras. Exercises are provided. The last 3 chapters explore more advanced topics in the application of geometric algebras to Pauli and Dirac spinors, special relativity, Maxwell's equations, quaternions, split quaternions, and group manifolds. They are included to highlight the great variety of topics that are imbued with new geometric insight when expressed in geometric algebra. The usefulness of these later chapters will depend on the background and previous knowledge of the reader.Matrix Gateway to Geometric Algebra will be of interest to undergraduate and graduate students in mathematics, physics and the engineering sciences, who are looking for a unified treatment of geometric ideas arising in these areas at all levels. It should also be of interest to specialists in linear and multilinear algebra, and to mathematical historians interested in the development of geometric number systems.