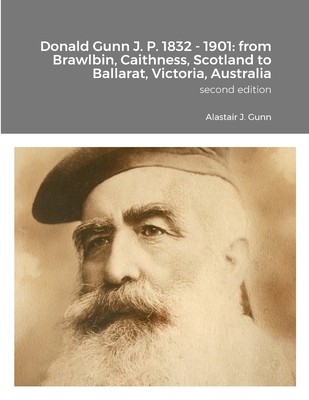 
Not On Our Shelves—Ships in 1-5 Days
(This book cannot be returned.)
Donald Gunn emigrated to Victoria, Australia, from Caithness, Scotland, in 1854. He settled near Ballarat and was a Councillor of Ballaratshire from 1865-1867 and then again from 1870 to 1876. This included time as President. He was also on the Council of the Ballarat and District Agricultural and Pastoral Society for at least the years 1860 to 1899, again including time as President. He, as well, participated in many other community activities including being the Foundation Secretary of the Buninyong Highland Society from 1857 to 1859. He also worked as a Justice of the Peace. Donald married and had ten children - the best known of these is the Honourable John Alexander Gunn whose work creating an anthrax vaccine suitable for Australian conditions ought to be better known. Donald's family descended from Coroner Gunn of Caithness, the first Gunn known to history. In fact, Donald's descendants includes the most senior known Gunn to have always held the surname Gunn.