Kicked By A Duck: A Ukrainian Family's Search For A Brighter Future (Paperback) 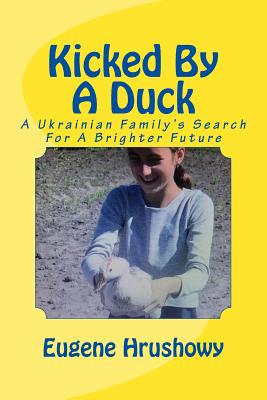 Kicked By A Duck: A Ukrainian Family's Search For A Brighter Future (Paperback)


Special Order—Subject to Availability
(This book cannot be returned.)
If someone is saying to you in Ukrainian, that they think you've been kicked by a duck, they are meaning to cast negative aspersions regarding your state of mind. In essence it would mean that they doubt your sanity. It might be said that many people and their families from Ukraine, specifically the southwestern part known as Galicia, must have been crazy to trust the word of strangers, to travel thousands of miles to a place that most of them had never heard of before, Canada. But leave they did. This is one family's story who left in 1897. The story begins with a current day examination of the effects of decades of Russian Soviet oppression in the area from L'viv to a tiny village named Latkivci. Reading between the lines, not much has changed from the late 1800's to the present, in the struggle for everyday Ukrainians to be free. Each chapter, told from the perspective of a different family member, details separate aspects of their journey from the Ukraine. Ride with the two brothers, Prokop and Pantelemon and their families as they deal with challenges on the ship to North America, on the train from Quebec City through to Winnipeg and finally experience the first few hours and days in Sifton Manitoba, their final destination and new Canadian home. Their journey ends on the Family farm, their second homestead, in Sclater Manitoba north and west of Dauphin. Join the seven brothers and one sister, the first generation Canadian born who grow up with a world full of choices and potential dreams. My first hope in telling these stories was to spin a family history which read more like a story than a text book. As such this memoir is a fictionalized history of one family. I didn't know all of the story tellers as most had died before I could possibly have formed a memory of them. I have taken liberties in assigning characters to people I didn't personally meet or know. My second hope was that these stories would serve as a starting point, for at best an incomplete selection, of the experiences of many families who came to Canada from the Ukraine. All the facts such as dates, people involved, name places and broad strokes of history are real and as such are not imagined. They are represented accurately within the confines of a non academic piece of work. My third and final hope was simply to put together a shared reference point from which to examine our connection with the past. It has been said that the sins of our forefathers visit their progeny; so too, do their hopes, aspirations and dreams. I am telling this family's story, not necessarily because it is unique. Many families, from many countries left everything and everyone of importance in their homeland to come to Canada. Many families came because, it had to be better, because it couldn't be worse. This memoir is an attempt to chronicle one family's striving to be more than what they were given or when good enough, wasn't good enough. And it is the story of when things are good, that they could be even better.