The Girls Who Stepped Out of Line: Untold Stories of the Women Who Changed the Course of World War II (Paperback) 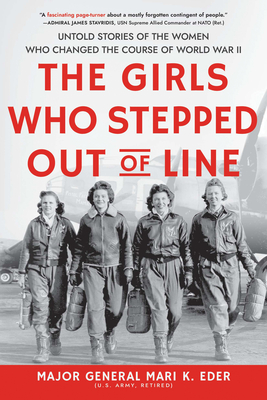 The Girls Who Stepped Out of Line: Untold Stories of the Women Who Changed the Course of World War II (Paperback)

For fans of Radium Girls and history and WWII buffs, The Girls Who Stepped Out of Line takes you inside the lives and experiences of 15 unknown women heroes from the Greatest Generation, the women who served, fought, struggled, and made things happen during WWII—in and out of uniform, for theirs is a legacy destined to embolden generations of women to come.

The Girls Who Stepped Out of Line are the heroes of the Greatest Generation that you hardly ever hear about. These women who did extraordinary things didn't expect thanks and shied away from medals and recognition. Despite their amazing accomplishments, they've gone mostly unheralded and unrewarded. No longer. These are the women of World War II who served, fought, struggled, and made things happen—in and out of uniform.

Liane B. Russell fled Austria with nothing and later became a renowned U.S. scientist whose research on the effects of radiation on embryos made a difference to thousands of lives. Gena Turgel was a prisoner who worked in the hospital at Bergen-Belsen and cared for the young Anne Frank, who was dying of typhus. Gena survived and went on to write a memoir and spent her life educating children about the Holocaust. Ida and Louise Cook were British sisters who repeatedly smuggled out jewelry and furs and served as sponsors for refugees, and they also established temporary housing for immigrant families in London.

Retired U.S. Army Major General Mari K. Eder wrote this book because she knew their stories needed to be told—and the sooner the better. For theirs is a legacy destined to embolden generations of women to come.

"My appreciation for the veterans in my own family who served during World War II, the Korean War, and the Vietnam War, coupled with the tragedy of 9/11 and the sacrifices made since, led me to absolutely consider myself a 'grateful American'—for the blessings of freedom provided by those who wear the cloth of our nation. Major General (Ret.) Mari K. Eder has without a doubt elevated my sense of gratitude even higher. The stories of extraordinary courage, service, and sacrifice by the women she highlights in this book, and all others who served similarly yet have not had their stories told, should inspire all who read this to be grateful Americans as well!" — Gary Sinise, Actor and humanitarian

"We don't think of the women of WWII as young girls determined to make a difference. But these women, and thousands like them, did. They networked, connected, and supported one another. When the war ended, that network collapsed, a victim of culture and society's focus on a 'return to normal.' We can't forget what they sacrificed and what they've given to us, and this book helps us do just that." — Michelle Tillis Lederman, author of The Connector's Advantage and The 11 Laws of Likability

"This book fills a historic void about Lieutenant Colonel Charity Adams and others who stepped out of line to succeed, because the "lines" did not support race, gender, or mission. Their moral courage and leadership knocked down many barriers within the military and beyond." — Colonel (Ret.) Edna W. Cummings, U.S. Army Six Triple Eight Advocate/Producer

"A tennis star who became a spy, a Polish immigrant who went to work for the OSS, a Jewish refugee who fought the Nazis as a partisan: these are some of the remarkable women whose incredible stories come to life in this engaging and important book. Mari Eder helps us to complete our history of the Second World War through voices that had been forgotten until now. A must-read for all who want to know more about women's history, the Second World War, and America in the twentieth century." — Michael S. Neiberg, author of Potsdam: The End of World War II and the Remaking of Europe

"A fascinating page-turner about a mostly forgotten contingent of people—women who willingly stepped 'out of line' to contribute to the Allied victory in WWII. It is a fresh set of gripping stories, from world tennis champ Alice Marble to far less well known heroines. Each story is moving and deeply inspirational." — Admiral James Stavridis, USN Supreme Allied Commander at NATO (Ret.)

"The Girls Who Stepped Out of Line is a must-read. Each chapter highlights a different woman who stepped out of line and did what was right—not what was easy or expected. These warriors defied the odds in their fight against bigotry, hatred, and prejudice of all kinds. Many of them helped save the lives of others or helped pave the path for a brighter and equal future for other women. Thankfully, we have someone such as Mari K. Eder, a woman and veteran who also led a selfless life, to bring these stories to life and to preserve the legacies of these heroic women. And while Eder may not be looking for accolades or recognition for this beautifully written tribute, we all owe her a debt of gratitude. I know I will be purchasing a copy of this book for each female warrior and hero in my life." — Adena Bernstein Astrowsky, author of Living Among the Dead

"Military women, intelligences agents, and partisan fighters who served in World War II remained much too modest about their accomplishments, and we are indebted to Major General Mari K. Eder (U.S. Army retired) for bringing to light their remarkable stories of dedication and heroism. An engaging and fast-paced work, this book will interest anyone who wants to fully understand why the Allies won the war. The Girls Who Stepped Out of Line offers accounts of remarkable role models that will inspire future generations of women and men who embark on a career in military service. Highly recommended." — G. Kurt Piehler, PhD, Director of the Institute on World War II and the Human Experience