I Heard of That Somewhere (Paperback) 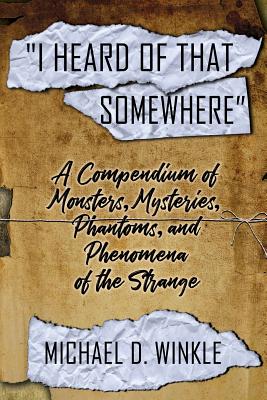 I Heard of That Somewhere (Paperback)

I HEARD OF THAT SOMEWHERE
A COMPENDIUM OF MYSTERIES, MONSTERS, PHANTOMS AND PHENOMENA OF THE STRANGE
BY MICHAEL D. WINKLE

You know you've heard that story. A young boy leaves his house to fetch a bucket of water and doesn't return. His family searches for him and find his tracks in the snow, but they suddenly come to an end - as if he simply disappeared. They hear the boy calling for help, as if from a distance, but he's never seen again. You know you heard of that somewhere... It happened in Indiana, or Alabama, or maybe it was in Wales.

In the middle of Times Square, a man dressed in Victorian-style clothing suddenly appears from nowhere and is hit by a cab and killed. All the papers found on him were dated from the 1870s. An inquisitive police chief dug back through old records and found that a man by the same name had left home for a walk one night in 1876 and had never returned. It's one of those stories you heard somewhere...

We all know them - historical and paranormal mysteries that are accepted as truth at parties, around campfires, and at the dinner table. They are fascinating, scary, strange, inexplicable stories that seem impossible to believe but according to every source we can remember, they are absolutely true

But are they? And do such stories have an authentic source or are they merely the result of a weird tale that's been told so many times that what really happened has vanished into the ether?

In this compelling compendium, author Michael D. Winkle sets the stories straight Through thousands of hours of Charles Fort-style research, he traces famous and not-so-famous rumors, tall tales, and bizarre legends to their origins. He recounts dozens and dozens of accounts that range from mysterious creatures to unsolved disappearances, ghosts, monsters, werewolves, inexplicable murders, and much more Some of the old stories are revealed as fiction - although not as many as you might think - while others become even stranger their sources are revealed.

And others? Well, they happened just the way that you heard them - somewhere.