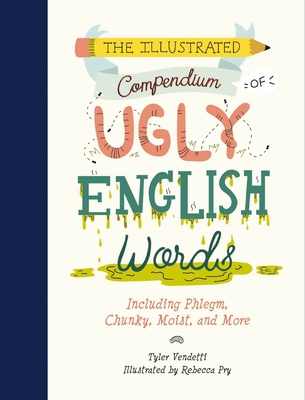 
Special Order—Subject to Availability
Behold the 300 Ugliest Words in the English Language!

J. R. R. Tolkien once said that cellar door is the most beautiful phrase in the English language; since then it has received quite a bit of attention from poets and linguists. But what of the ugly words? This delightfully humorous volume celebrates the words that make people gag and cover their ears. Too long have these atrocious utterances gone unrecognized, nay, shunned from society. No longer! The Illustrated Compendium of Ugly English Words pays homage to the 300 worst words in existence, such as:

Amazeballs (noun): The public’s opinion on this word can be perfectly encapsulated by a recent Slate article titled “Who coined amazeballs and why do they hate humanity?”
Chunky (adjective): Chunky (meaning “lumpy”) is a word so vile, it can make even the most pleasant image sound disgusting. Let’s try. Chunky flower. Chunky chocolate milk. Chunky Jonathan Van Ness. See?
Moist (adjective): Slightly or moderately wet; damp; the linguistic equivalent of stepping in a lukewarm puddle in socks and feeling the water ooze between your toes with every step thereafter.
Rural (adjective):  Meaning “of the countryside,” rural’s definition is not actually gross. Its foulness stems more from its pronunciation, which forces the speaker to make a noise akin to the grunt of a zombie.
Worm (noun): Any type of burrowing, elongated invertebrate with a soft, limbless body. (Is that a description of a real creature or a monster from a nightmare video game? Hard to say.)

What makes these words ugly? It’s the nature of the word’s meaning, the pre-existing association the reader has with the word, or the sound and look of the word—or all three! The Illustrated Compendium of Ugly English Words catalogues the ugliness from A to Z, along with each word’s pronunciation guide, definition, and origin, plus quotes demonstrating usage. Illustrations on nearly every page of this hardcover make it both a hilarious reference book and the ideal gift for anyone who can’t stand the sound of words like acrid, panties, gubernatorial, ointment, and squirt.

More than anything, though, this compendium can be used as a reminder that, despite all of our differences, deep down we all share the same hopes, the same dreams, and the same primal hatred for the terms that make us go, “Ugh, why would you even say that?!”

Proceed at your own risk!
Tyler Vendetti is a writer and wannabe dog mom whose work focuses on pop culture, humor, and the trials and tribulations of twentysomething-hood. Author of The Illustrated Compendium of Ugly and Gross English Words, she boasts bylines in xoJane, TIME Online, Cosmopolitan magazine, HelloGiggles, The Penny Hoarder, and Thought Catalog, among others. Formerly of NBCUniversal and Warner Bros., she works as an entertainment assistant in Los Angeles. A comedy enthusiast with a flair for horror, Tyler can be found on Twitter @HeyThereFuture or at her home in Los Angeles, where she’s been hiding behind the couch the whole time.