Is Life Too Long?: Essays About Life, Death, and Other Trivial Matters (Paperback) 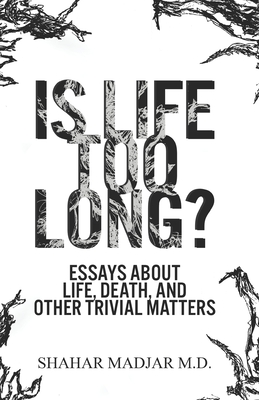 Is Life Too Long?: Essays About Life, Death, and Other Trivial Matters (Paperback)


Not On Our Shelves—Ships in 1-5 Days
(This book cannot be returned.)
Is Life Too Long? Essays about Life, Death, and other Trivial Matters is a collection of 18 selected essays and medical tales that were first published in The Mining Journal and in The Mining Gazette, the two leading newspapers of the Upper Peninsula of Michigan. Dr. Shahar Madjar tells the stories of doctors and their patients with empathy, philosophical flavor, and humor.Shahar Madjar, MD, MBA, is an Israeli-born urologist practicing in the remote, cold Upper Peninsula of Michigan (population 300,000). His medical training took him to different parts of the world: Tel Aviv, Israel; London, England; Miami, Florida; Cleveland, Ohio; Jackson, Mississippi; and Stony Brook, New York. Dr. Madjar is a former fellow at the University of Miami, Clinical Associate at the Cleveland Clinic, and Assistant Professor of Clinical Urology at the State University of New York, Stony Brook. He has published more than 50 articles in the medical literature and has presented his research internationally. For the past several years, Dr. Madjar has been writing a popular medical column for The Mining Journal, and for The Mining Gazette, the two leading daily newspaper of the Upper Peninsula of Michigan. He lives with his wife and three sons in Marquette, Michigan.