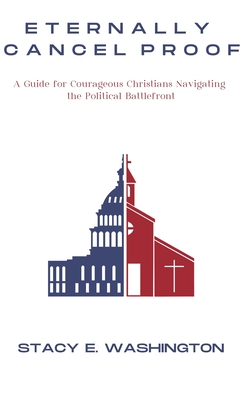 While so many Americans are paralyzed about the cancel culture coming for them - ruining their lives, literally and figuratively - Stacy Washington isn't worried.

Stacy Washington is Eternally Cancel Proof. Do you want to know why?

In her new book, Eternally Cancel Proof, Stacy Washington explains how she beat the tyranny of woke culture and became a more biblical person - and how you can do it, too

Washington is the host of the "Stacy on the Right" program on SiriusXM-Patriot satellite radio. She is the co-chairman of the Project 21 black leadership network and a political commentator on the Fox News Channel, One America News and countless radio stations. She is a veteran of the U.S. Air Force who served as a surrogate for President Donald Trump during the 2020 presidential campaign and was a spokesperson for the National Rifle Association. Most importantly, she is a wife, mother and devoted churchgoer.

All of these things make her a prime target for cancellation. Yet Stacy is Eternally Cancel Proof. And she can teach you her secrets.

In Eternally Cancel Proof, Washington chronicles her journey into a deeper Christian faith and political conversion from liberal Democrat to conservative Republican. She breached the self- imposed wall of separation keeping so many people from using their faith to define political morality. She's overcome the feelings-based governance that created policies that frustrates people of faith and threatens to destroy those who don't toe the woke line.

To become Eternally Cancel Proof, Stacy advocates a "Biblical Worldview" that combat America's long march away from our Founding Fathers' vision. She used this view to break away from leftists seeking to shepherd people toward a socialist future in inequality, subjugation and godlessness.

Using intensely personal stories of her own journey, Stacy explains to readers:

"While I have always considered myself a Christian, I've not always had a Biblical Worldview," Washington wrote in Eternally Cancel Proof. "In order to live a wise and joy-filled life, Christians must possess and utilize the Biblical perspective - especially when dealing with politics."

Fully-sourced and drawing heavily from biblical text, Eternally Cancel Proof shows the importance of not being silent. It warns against letting the loud and ill-informed dominate political and moral debates, setting aside the importance of scriptural lessons and stripping people of their most important weapon: the truth.

"Being eternally cancel proof means standing immovable amidst the constant stream of bad news emanating from Washington, and knowing what actions must be taken with the full knowledge that success is built on obedience and that God is in control," Washington advises.