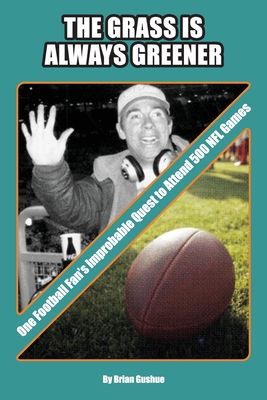 On November 6, 2017, Brian Gushue attended his 500th NFL football game. He achieved this unlikely feat despite his lifelong battle with cerebral palsy.

His devotion to football, especially its highest level, was borne out of his enjoyment of playing the sport as a child and his lifelong admiration for Miami Dolphins quarterback Bob Griese, who he got to see play in person only once. Eventually, Brian made it his mission to see a game in every NFL stadium with a grass field -- because he prefers the look, feel and smell of grass compared to artificial playing surfaces.

The Grass Is Always Greener -- One Football Fan's Improbable Quest to Attend 500 NFL Games is full of football facts, commentary, and history intertwined with memories from Brian's incredible journey, which will awe and inspire not only fans of the game but anyone who has a dream and the determination to make it come true.