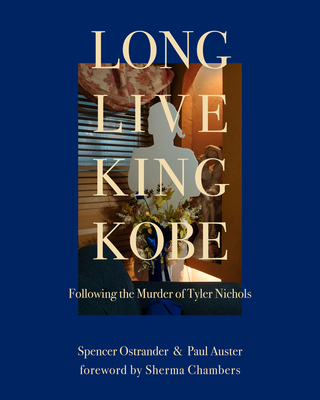 
In Stock—Click for Locations
"On the eve of Christmas Eve..." Paul Auster writes, "Tyler Kobe Nichols collapsed onto the sidewalk with three knife wounds in the front of his torso and one in the back."His death soon followed. With it, the twenty-one-year-old joined the ranks of young people killed by senseless violence in America. Tyler's death warranted just two paragraphs in the New York Daily News. And yet with each death, a new story begins that is rarely if ever told; one that centers around the fallout from traumatic loss. This story, as Tyler's mother Sherma Chambers keenly observes, is generational, with no clear end in sight.Long Live King Kobe began with a mistake. Photographer Spencer Ostrander had arrived at the funeral for Tyler believing he was a victim of gun violence, and hoping to include him in an ongoing project Ostrander had created to document the lives of gun victims. Instead, he met Sherma Chambers, and a week later a collaboration, which soon included Paul Auster, had begun--one in which a pair of strangers would join a family in their sorrow.Thanks to the generosity of the entire Nichols/Chambers family, Long Live King Kobe invites us to join them in their intimate grief in the weeks that followed Tyler's death. The family's response to his murder, including their creation of a foundation dedicated to counteracting street violence with love, is one that presents their tragedy as a means for our society to grow.Long Live King Kobe offers a privileged journey into the power of community for all who have felt outrage, confusion, sadness, and deep despair at the epidemic of violence in our country. It also provides reason to hope. The Long Live King Kobe Foundation, started by Sherma Chambers, will support nonviolence initiatives to keep youth safe. Proceeds from this book will benefit the foundation.