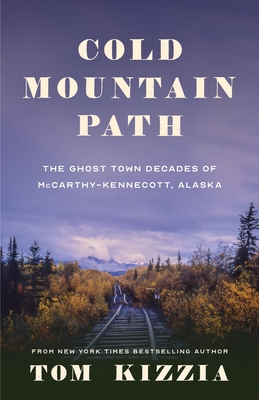 In this history of life in an isolated ghost town, bestselling Alaska author Tom Kizzia unfolds a deeply American saga of renunciation and renewal.

The spirit of Alaska in the old days - impetuous, free-wheeling, and bounty-blessed - lived on in the never-quite-abandoned mining town of McCarthy. While the new state boomed in the pipeline era, cagey old-timers and young back-to-the-landers forged a rough wilderness community that lived by its own rules.

As the T'ang Dynasty mountain poet Han Shan wrote, "If your heart was like mine, you'd get it and be right here."

The Wrangell Mountains developed a reputation as a hermit kingdom, "contrary and self-reliant, where settlers tougher than the rest of us salvaged, in post-apocalyptic fashion, the rusted relics of a profligate past." But history had its eyes on McCarthy. Pressures grew to improve access for tourists and speculators, and to cordon off the wild surroundings in a national park.

Here is the story, hopeful but haunted, of those latter-day pioneers - from the afternoon the last copper train left the valley, to the icy morning when a man with a rifle brought the lost decades to an end.

Cold Mountain Path is loaded up with vivid accounts of heroes and lovers, crackpots and con artists, feuding prospectors and daring bush pilots. An outlaw who became Alaska's iconic art-museum sourdough. A secret government plan to explode an atomic bomb. A young Harvard graduate who followed the path of ascetic Chinese poetry into marriage with a mountain man. A loner who decided Nature would be better off with all of them gone.

And tying the half-century together, the life story of a cantankerous and idealistic homesteader, Jim Edwards, who lived in the valley longer than any of them, "the ghost in Alaska's rear-view mirror."

Beyond the whimsical reminiscing of old-timers, the book is also a serious environmental history: a meditation on ghost towns, a funhouse-mirror reflection of modern Alaska, and an on-the-ground recounting of the conservation battle to create the country's largest national park.

Now the author brings those narrative skills to the untold story of a town that dreamed it could stay hidden in the snows of the past.