Bless.ed One: From a shantytown in Kabwé, Zambia, to the first Black African in the U.S. Open (Hardcover) 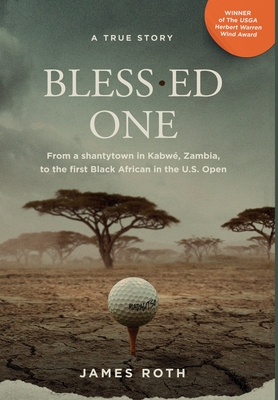 Bless.ed One: From a shantytown in Kabwé, Zambia, to the first Black African in the U.S. Open (Hardcover)

Centuries of false truths upended. An entire sport redefined. Madalitso Muthiya did both at the U.S. Open in New York on June 5, 2006, armed only with a glistening driver, inexplicable talent, and stern but loving tutelage from his father. His warm smile and casual demeanor cloaked a hardened determination that came from a life surrounded by disease and extreme poverty and enduring the awkward stares and quiet whispers that made him an outsider.

To everyone here, "Mad" was new. A fresh face. An unexpected splash of uniqueness that sent fans scrambling for information. But their tournament programs didn't reveal the origin of his story. It certainly wasn't a stately golf course in New York under the warm morning sky, rubbing elbows with the well-heeled. The elite. It began decades earlier, oceans and continents away, in a land defined by one peoples' crimes against another. Racism, forced labor, cultures destroyed, families torn apart.

History was often his fuel. At other times, a lead weight chained to his golf bag. A burden he carried everywhere, to every tournament until his father's voice exhorted him to let it go. 'Just focus on what you need to do.'

At 9:01 AM on June 5 his ball and tee were firmly planted. The fairway beckoned in front of him. The heavens shined down. A single display of his God-given swing would change golf. Forever.