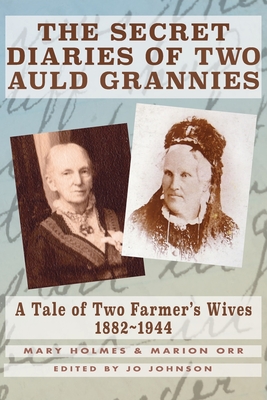 
Not On Our Shelves—Ships in 1-5 Days
(This book cannot be returned.)
In 1956, the editor's father, John Holmes Johnson, cleared out his mother Janet's house after she died. Among her stuff, he found three old diaries, written by his maternal grandmother Marion Orr and her mother Mary Holmes (John's great-grandmother). He took the ancient notebooks home, put them in a brown manilla envelope and placed them in his filing cabinet. There they remained until he retired in the mid-1980s. For several years prior to his death in 2008, he took on the mammoth task of transcribing the handwritten diaries. He laboured over them for several years, deciphering the sometimes difficult to read handwritten script, and typing them up on his Amstrad computer and later on his Windows desktop.Both diarists were born and brought up on farms in the countryside surrounding the villages of Kilmacolm and Bridge of Weir in the West of Scotland. Both married farmers. Spanning the years between 1882 and 1944, the diaries paint a fascinating picture of the lives of these hard-working country folk during those sixty-two years.Not only did the two grannies record family fortunes and tragedies, they also mentioned international events of interest to them, such as the International Glasgow Exhibition, the 'Spanish Flu' epidemic and other events that affected them during the First and Second World Wars. Readers will be fascinated by the details recorded in the late 19th and early 20th centuries by these strong and characterful women.