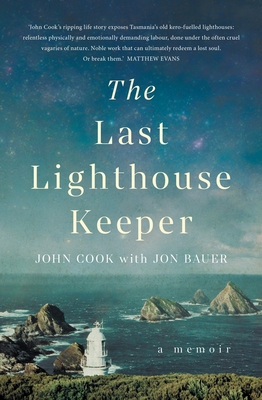 
Not On Our Shelves—Ships in 1-5 Days
A beautiful memoir from one of Tasmania's last kerosene lighthouse keepers: a story about madness and wilderness, shining a light onto the vicissitudes of love and nature

I loved the life of the island, because I knew my body was more alive than it was on the mainland. People asked how we stood the isolation and boredom, but in some ways, it was more stimulating to have your senses turned up.

In Tasmania, John Cook is known as "The Keeper of the Flame." As one of Australia's longest-serving lighthouse keepers, John spent 26 years tending Tasmania's well-known kerosene "lights" at Tasman Island, Maatsuyker Island, and Bruny Island.

From sleepless nights keeping the lights alive, battling the wind and sea as they ripped at gutters and flooded stores, raising a joey, tending sheep, and keeping ducks and chickens, the life of a keeper was one of unexpected joy and heartbreak. But for John, nothing was more heartbreaking than the introduction of electric lights, and the lighthouses that were left empty forever.

Evocatively told, The Last Lighthouse Keeper is a love story between a man and a dying way of life, as well as a celebration of wilderness and solitude.
John Cook moved from the UK to Tasmania as a boy with his mother at the outbreak of World War II. John grew up loving the natural environment and being practical. After serving in the Australian Navy, being a walking-track maintenance worker, operating a mobile x-ray health scanning unit, and running service stations, John joined the Australian Lighthouse Service in 1968. He was a lightkeeper and later head keeper at various Tasmanian lights, notably Eddystone Point, Tasman Island, Maatsuyker Island, and Bruny Island, until 1993. John was also an honorary National Park Ranger.

Jon Bauer was born and raised in the UK, before moving to Australia in 2001 where he lived for thirteen happy years. He now lives in the UK again where he works as a somatic psychotherapist, as well as continuing to write short and long fiction. His novel Rocks in the Belly was longlisted for the Miles Franklin Award, won Best Debut in the Indies, was shortlisted for the Dublin IMPAC, broadcast on ABC National and published in eight countries. He has never worked in a lighthouse but he does have a lot of woolly sweaters, experience with extremes of wilderness and solitude, and shaves only sporadically. He is working on a new novel.
"John Cook's ripping life story exposes Tasmania's old kero-fuelled lighthouses: relentless physically and emotionally demanding labour, done under the often cruel vagaries of nature. Noble work that can ultimately redeem a lost soul. Or break them." —Matthew Evans

"A wonderful personal book that will be enjoyed by anyone who loves lighthouses or is interested in stories of isolation, hardship, nature and landscape. Simply written, it contains some beautiful descriptive passages of the natural world and the challenging weather conditions on Tasman and Maatsuyker Islands. . . . It is also an honest account of one man's journey through life. The difficulties of marriage. Separation from family. Friendship with animals. The confronting loneliness of isolation. The solace of nature." Canberra Times