Missing: He was brilliant and troubled and for thirty-five years he lived alone in the wild . . . then there was silence (Paperback) 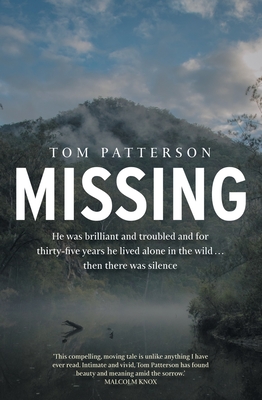 Missing: He was brilliant and troubled and for thirty-five years he lived alone in the wild . . . then there was silence (Paperback)


Special Order—Subject to Availability
Beautifully written and affecting, this is the true story of a young man caught in a world he can't control and how he finds a way to survive

Hey mate, Pete and Steve have been talking to some people who live around the national park where Mark lives . . . nobody has seen him for months . . . We're about to head into the gorge . . . I'll let you know what we find . . .

In 1972 Mark May is eighteen. He is bright, beautiful and has a scholarship to study law. Ten years later he descends alone into remote gorge country in north-western New South Wales. He lives in rough camps and stays for thirty-five years. Then, on a feeling, his brothers go looking for him.

Missing is a true story of immense emotional force. It tells of a broken life and a ruptured family but is also a spare and eloquent story of survival that carries a deep humanity. It announces a significant new talent in Australia writing.

'This compelling, moving tale is unlike anything I have ever read. Intimate and vivid, Tom Patterson has found beauty and meaning amid the sorrow.' - Malcolm Knox

'An inside look into an outsider's world, tenderly and beautifully told.' - Greg Bearup
Tom Patterson grew up in the New England region of New South Wales. In all the time he spent hiking in the gorge country, he never saw Mark. Missing is his first book.