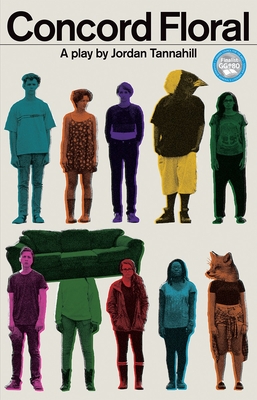 Winner of the 2015 Carol Bolt Award

Finalist for the 2016 Governor General's Literary Award for Drama

The Decameron meets I Know What You Did Last Summer in this suburban thriller in which ten teenagers flee a plague of their own making.

Concord Floral is a one-million-square-foot abandoned greenhouse and a refuge for neighborhood kids; a place all to themselves in which to dream, dare, and come of age. But hidden there is a secret no one wants to confront, and when two friends stumble upon it they set off an unstoppable chain of events, from shadows in parking lots to phone calls from the grave. It's time for the teens of Concord Floral to start talking.

Jordan Tannahill is a playwright, theatre director, and filmmaker. The Globe and Mail recently called Jordan " . . . the poster child of a new generation of (theatre? film? dance?) artists for whom "interdisciplinary" is not a buzzword, but a way of life." His plays have been presented across Canada, and his films have been widely exhibited at venues such as the Toronto International Film Festival, the Art Gallery of Ontario, and the British Film Institute. Jordan received the 2014 Governor General's Literary Award for Drama for his book Age of Minority: Three Solo Plays. In collaboration with William Ellis, Jordan runs the alternative art-space Videofag in Toronto. Visit www.jordantannahill.com