The Elusive Mr. Pond: The Soldier, Fur Trader and Explorer Who Opened the Northwest (Hardcover) 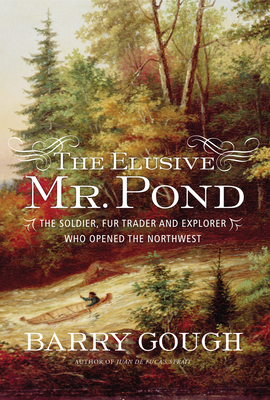 The Elusive Mr. Pond: The Soldier, Fur Trader and Explorer Who Opened the Northwest (Hardcover)


Backordered
Sir Alexander Mackenzie is known to schoolchildren as a great Canadian explorer who gave his name to the country's longest river, but hardly anyone could name the man who mentored Mackenzie and mapped much of northwestern Canada before him. Soldier, fur trader and explorer Peter Pond, the subject of this long overdue book, is a man whose legend has been forgotten in favor of those who came after him. Much of Pond's life is shadowed in mystery. Historian Barry Gough uses Pond's surviving memoirs, explorers' journals, letters written by acquaintances of Pond, publications in London magazines and many other sources to track and reconstruct the life of one of the last of the tough, old-style explorers who ventured into the wilderness with little more than a strong instinct for survival and helped shape the modern world.

Dr. Barry Gough, one of Canada's foremost historians, is a Fellow of the Royal Historical Society, Fellow of King's College London and Life Member of the Association of Canadian Studies, and has been awarded a Doctor of Letters for distinguished contributions to Imperial and Commonwealth history. He is well recognized for the authenticity of his research and the engaging nature of his narratives, and is the author of many critically acclaimed books, including "Fortune's a River: The Collision of Empires in Northwest America" (Harbour, 2007), which won the John Lyman Book Award for best Canadian naval and maritime history and was shortlisted for the Writers' Trust Non-Fiction Prize. Gough has been writing for almost four decades. He lives in Victoria, BC, with his wife, Marilyn.