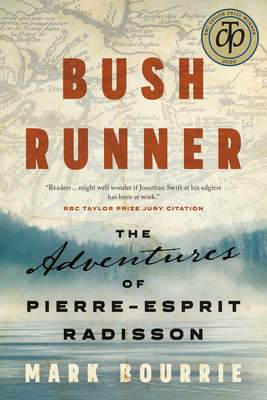 WINNER OF THE 2020 RBC TAYLOR PRIZE - Readers might well wonder if Jonathan Swift at his edgiest has been at work.--RBC Taylor Prize Jury Citation - A remarkable biography of an even more remarkable 17th-century individual ... Beautifully written and endlessly thought-provoking.--Maclean's

Known to some as the first European to explore the upper Mississippi, and widely as the namesake of ships and hotel chains, Pierre-Esprit Radisson is perhaps best described, writes Mark Bourrie, as "an eager hustler with no known scruples." Kidnapped by Mohawk warriors at the age of fifteen, Radisson assimilated and was adopted by a powerful family, only to escape to New York City after less than a year. After being recaptured, he defected from a raiding party to the Dutch and crossed the Atlantic to Holland--thus beginning a lifetime of seized opportunities and frustrated ambitions.

A guest among First Nations communities, French fur traders, and royal courts; witness to London's Great Plague and Great Fire; and unwitting agent of the Jesuits' corporate espionage, Radisson double-crossed the English, French, Dutch, and his adoptive Mohawk family alike, found himself marooned by pirates in Spain, and lived through shipwreck on the reefs of Venezuela. His most lasting venture as an Artic fur trader led to the founding of the Hudson's Bay Company, which operates today, 350 years later, as North America's oldest corporation.

Sourced from Radisson's journals, which are the best first-hand accounts of 17th century Canada, Bush Runner tells the extraordinary true story of this protean 17th-century figure, a man more trading partner than colonizer, a peddler of goods and not worldview--and with it offers a fresh perspective on the world in which he lived.

Mark Bourrie is an Ottawa-based author, lawyer, and former journalist. He holds a master's in Journalism from Carleton University and a PhD in History from the University of Ottawa. In 2017, he was awarded a Juris Doctor degree and was called to the Bar in 2018. He has won numerous awards for his journalism, including a National Magazine Award, and received the RBC Charles Taylor Prize in 2020 for his book Bush Runner: The Adventures of Pierre Radisson.