Things Are Against Us (Hardcover) 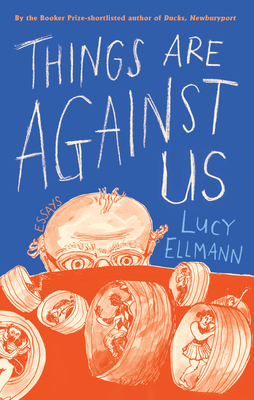 Things Are Against Us (Hardcover)

An Independent Best Book of 2021

" Ellmann] delivers these diatribes with her signature wit and humor ... Each essay is accompanied by an illustration by artist Diana Hope, which complements the colorful nature of this collection. Fans of Ellmann will likely delight in Things Are Against Us."--Chicago Review of Books

The author of the Goldsmiths Prize-winning and Booker-shortlisted blockbuster Ducks, Newburyport returns with a rollicking new collection of satirical essays

Things fall apart; the centre cannot hold. As Yeats pointed out, things have a lot to answer for. These satirical essays jauntily tackle the obstinacy, incorrigibility, and recalcitrance of things, Laura Ingalls Wilder's unimpressive descriptions of the construction of bobsleds and door latches, and the way we try to stand on our own two feet, put our best foot forward, remain footloose and fancy-free, and inevitably put our foot in it. They also cover the first suggestion the internet offers when you look up the word 'women' (spoiler: it's shoes) and other annoyances (some fatal) of male supremacy, the nobility of buttons, and what the rejection of tourists by Jordanian donkeys should mean for global travel (stop ). Ingrid Bergman and Jane Austen come into it somewhere (Helen Gurley Brown was forcibly removed).

Early versions of some of these essays have appeared in international outlets of record, but others are brand-new and ready for your delectation.

Here's the thing: Lucy Ellmann is extremely shy. She's so awkward and self-conscious that meeting strangers, or almost anyone, exhausts her. She's lousy at remembering names. She cannot add or subtract. She hates having appointments in her diary and prefers to wear the same outfit every day. She's a helpless iconoclast much prone to anger. She's also distrustful, lazy, and easily hurt. She is not a team player. She prefers interrupting people to organising them, and cries if she doesn't get her way. She fears she's neglected everybody she knows, and vice versa--not to mention people she doesn't know. She can't stand protocol, committees, business hours, ceremonial occasions, and filling out forms. And she never wants to be carried through a crowd on a palanquin. Otherwise, the world's her oyster! She has written seven novels, including Sweet Desserts (Guardian Fiction Prize) and Ducks, Newburyport (Goldsmiths Prize, James Tait Black Memorial Prize), and an illustrated book for adults, called Tom the Obscure. This is her first essay collection.