Two at the Top: A Shared Dream of Everest (Hardcover) 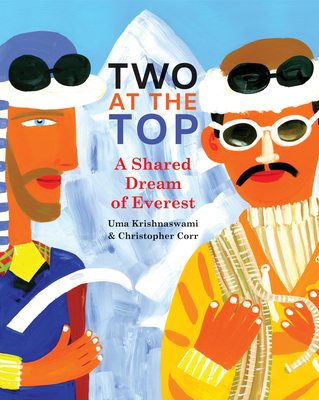 Two at the Top: A Shared Dream of Everest (Hardcover)

Tenzing Norgay and Edmund Hillary each tell their story, culminating in their thrilling ascent of Mount Everest.

Tenzing Norgay grew up in Nepal, herding yaks in the shadow of Chomolungma, the mountain also known as Everest. He has always dreamed of climbing to the top. He becomes a guide, leading treks through the Himalayas, and finally attempts the highest mountain himself, but doesn't make it.

Across the ocean, in New Zealand, Edmund Hillary grew up tending his father's bees. He climbed his first mountain at sixteen and has climbed all over the world ever since. He tries Everest, with no success.

In 1953, the two men set out on the same expedition to climb Everest. Their party numbers four hundred, counting all the guides and porters. But the climb is grueling, and eventually Norgay and Hillary are the only two determined to continue. They tramp over windswept glaciers, crawl across rope bridges, hack footholds in the ice ... until finally they reach the top of the world

CCSS.ELA-LITERACY.RL.K.3
With prompting and support, identify characters, settings, and major events in a story.