It Was Dark There All the Time: Sophia Burthen and the Legacy of Slavery in Canada (Paperback) 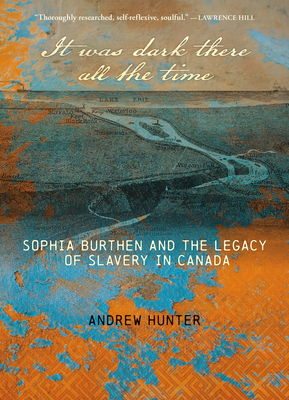 It Was Dark There All the Time: Sophia Burthen and the Legacy of Slavery in Canada (Paperback)

"My parents were slaves in New York State. My master's sons-in-law ... came into the garden where my sister and I were playing among the currant bushes, tied their handkerchiefs over our mouths, carried us to a vessel, put us in the hold, and sailed up the river. I know not how far nor how long -- it was dark there all the time."

Sophia Burthen's account of her arrival as an enslaved person into what is now Canada sometime in the late 18th century, was recorded by Benjamin Drew in 1855. In It Was Dark There All the Time, writer and curator Andrew Hunter builds on the testimony of Drew's interview to piece together Burthen's life, while reckoning with the legacy of whiteness and colonialism in the recording of her story. In so doing, Hunter demonstrates the role that the slave trade played in pre-Confederation Canada and its continuing impact on contemporary Canadian society.

Evocatively written with sharp, incisive observations and illustrated with archival images and contemporary works of art, It Was Dark There All the Time offers a necessary correction to the prevailing perception of Canada as a place unsullied by slavery and its legacy.