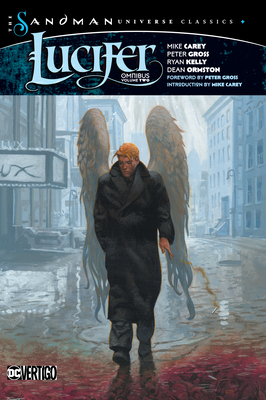 
On Our Shelves Now at:
From the pages of The Sandman by Neil Gaiman, the Fallen One continues his own epic journey in the final installment of the omnibus collections featuring Mike Carey's acclaimed, Eisner Award-nominated series.

The Fallen One continues his epic journey in this second omnibus collection featuring Mike Carey's acclaimed, Eisner Award-nominated series. Lucifer Morningstar has resigned his throne and abandoned his kingdom, and filled his days supervising the business at Lux, Los Angeles's most elite piano bar. After agreeing to complete a task assigned by the Creator Himself, Lucifer's retirement became a thing of the past. The Lord of Hell must team up with unexpected allies in order to not only fulfill the task sent by the Creator, but to stop the universes from collapsing and destroying all creation.

The Devil's hands have been idle long enough.

Collects Lucifer issues #36-75.
Writer Mike Carey, best known for his work on Vertigo's Lucifer and Hellblazer, has made his mark in comics. Born in Liverpool, England, Carey worked as a teacher for 15 years before gaining regular work writing for several independent companies. In 1999 he wrote the Sandman spin-off miniseries Sandman Presents: Lucifer. This led to the Lucifer solo title, which earned him a nomination for the 2001 Will Eisner Comic Industry Awards -- Best Writer. The Fourth Rail said of his work, "Carey gives the characters in all of the stories believable motivations and characterization." His additional Vertigo projects have included Faker and Crossing Midnight. In 2007 he helped DC launch the Minx line of graphic novels for teen girls with The Regifters. Beyond DC, Carey was also recognized for his work on Marvel's X-Men titles. He makes his home in London with his wife, Lin, and his children, Davey, Ben, and Louise.