Lost on the Map: A Memoir of Colonial Illusions (Paperback) 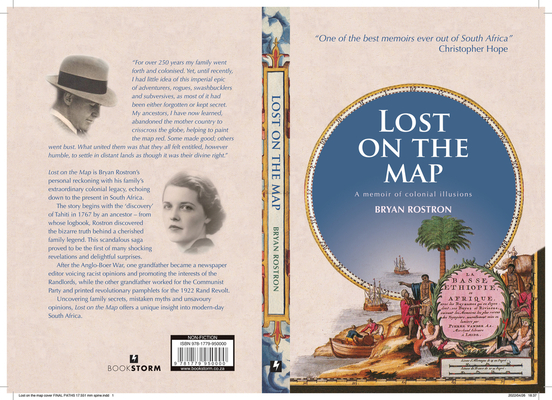 Lost on the Map: A Memoir of Colonial Illusions (Paperback)


Backordered
For 250 years the author’s family spread across the globe, helping to expand the British Empire and paint the map red. This is a personal reckoning with that dubious legacy, echoing down to the present in South Africa. It begins with the ‘discovery’ of Tahiti in 1767 by an ancestor, from whose log book Rostron reveals that his sailors were exchanging the ship’s nails for sex with Tahitian maidens so that HMS Dolphin began, literally, to fall apart. After the Anglo-Boer war, having emigrated to South Africa, one grandfather became editor of the Sunday Times, voicing racist opinions, and later of the Rand Daily Mail, at that time a voice of the Randlords. Ironically, his other grandfather worked for the Communist Party and printed revolutionary pamphlets for the violent 1922 Rand Revolt. In a bizarre twist, Rostron’s father managed the 1936 South African boxing team at the Berlin Olympics, where from under his nose their star boxer was recruited by the Nazis. Uncovering family secrets and mistaken myths, Rostron offers a unique insight into modern-day South Africa’s colonial past.
Born in Johannesburg, Bryan Rostron has worked as a journalist in Italy, New York, London, and South Africa, writing for the New York Times, The Guardian, The Spectator, and Private Eye. He was the South African correspondent for the New Statesman and contributes to South African papers. He is the author of six books.
"One of the best memoirs ever out of South Africa" —Christopher Hope