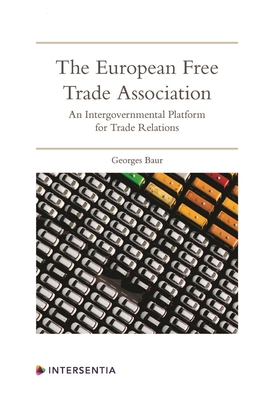 
Special Order—Subject to Availability
(This book cannot be returned.)
This book shall be an introduction into the European Free Trade Association (EFTA) as an international organization and, inter alia, as a platform for its member states' relations with the EU and for jointly negotiated Free Trade Agreements. EFTA - originally set up by the UK - is an example of how countries that do not want to be members of the EU can still have close links with it. EFTA is a loose intragovernmental association of some economically highly specialised, small and wealthy Western European small states which have, until now, decided not to join the European Union (EU). Essentially it is the platform for Iceland, Liechtenstein, Norway and Switzerland to coordinate their free trade policies as far as possible. Iceland, Liechtenstein and Norway also use EFTA, in particular its Secretariat, to manage their membership of the European Economic Area (EEA) and to adopt relevant legislation into the Agreement. Particularly in the context of Brexit it should also be noted that there are elements of the relations between the four EFTA States and the EU which are not necessarily based on either the EEA Agreement or the EU-Swiss Agreements. Until recently, EFTA was considered an outdated model. However, since Brexit interest in EFTA has increased. Where the subject was covered in the press, but also in relevant statements by politicians, there was hardly any distinction made between 'EFTA' and the 'EEA'. This book is not about Brexit, rather it will correct certain misconceptions about EFTA and provide a clear overview on what EFTA is: a platform for the economic relations between its member states; a platform for its member states' free trade policy and a platform for its member states' relations with the EU. There will be food for thought on the UK's future outside the EU.
Georges Baur is a Senior Research Fellow specialising in European law and international trade law at the Liechtenstein-Institute. He received his doctorate in law from the University of Zurich before being admitted to the bar. Prior to joining the Liechtenstein-Institute in 2018, he advised the Liechtenstein Government on financial services issues and European law, was the Deputy Head of the Liechtenstein Mission to the EU and acted as Assistant Secretary General of EFTA. He also chaired the Scientific Board of the Liechtenstein-Institute until 2003. His research interests lie in European association law and other forms of international treaties as well as their institutional structures. His work also covers legal theory and its historical development. His current research focuses on the recent development of European external relations, particularly with view to the UK and EFTA, including the doctrinal aspects of their structural principles.