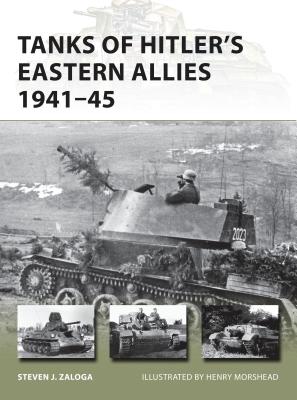 This is book number 199 in the New Vanguard series.

The titanic armor battles of the Russian Front are widely known, but the role of Germany's eastern allies is not as well known. Two of these countries, Romania and Hungary, manufactured their own tanks as well as purchasing tanks from Germany. These ranged from older, obsolete types such as the PzKpfw 35(t) all the way up to the latest and best German vehicles including the Tiger I and Hetzer. These tanks played a frequent role in the battles in southern Russia and Ukraine and were especially prominent in the disaster at Stalingrad where the Red Army specifically chose the weaker Romanian and Hungarian salients for their critical envelopment operation. This New Vanguard will provide a broad survey of the various and colorful tanks used. Besides covering the largest of these Axis tank forces, this book will cover the many smaller and lesser known forces including the Italian contingent in Russia, the Finnish armored force, and the small but interesting armored forces of the Russian Vlasov (RONA), Croatian, Bulgarian and Slovakian armies. This subject is seeing increasing interest in the modeling world; for example Tamiya recently announced a PzKpfw 35 (t) (suitable for Romanian, Slovak armies) a Finnish StuG III, and a Finnish BT-42.
Steven J. Zaloga received his BA in History from Union College and his MA from Columbia University. He has worked as an analyst in the aerospace industry for four decades, covering missile systems and the international arms trade, and has served with the Institute for Defense Analyses, a federal think tank. He is the author of numerous books on military technology and history, including NVG 294 Allied Tanks in Normandy 1944 and NVG 283 American Guided Missiles of World War II. He currently lives in Maryland, USA.

“The matchless Steven J. Zaloga returns with a superb study of WWII Eastern Front Axis armor ... Tanks of Hitler's Eastern Allies 1941–45 ... tells the titanic tale from the perspective of Nazi Germany's co-belligerents. And what a superb story it is.” —David L. Veres, www.cybermodeler.com (June 2013)

“...an excellent book and one that any armor fan will thoroughly enjoy. It is chock full of great photos and some equally superb artwork. It is divided by telling the story of each nation's armor and how it was used during the war. It is a book that modelers will find of much interest as it offers something a bit different from the norm. A book that I can easily recommend to you.” —Scott Van Aken, Modeling Madness (May 2013)