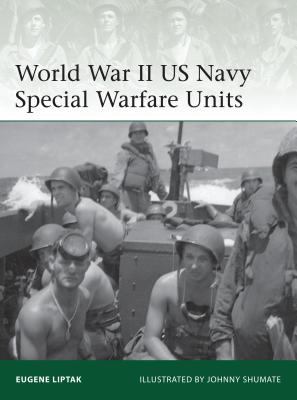 This is book number 203 in the Elite series.

When the United States entered World War II, it was apparent that the war would only be won by taking the fight to the Axis, in the shape of large-scale amphibious landings. Accordingly, the US Navy developed several types of specialized unit to reconnoiter potential landing areas, degrade the enemy's ability to resist, and assist the landing forces on to the beaches. These operatives had to get there first, alone, and carry out their missions before the GIs and Marines could land with any chance of success.

Formed in September 1942 and active in the Mediterranean, European, and Pacific theaters, the Scouts and Raiders were forerunners of the SEALs; they used canoes to secretly reconnoiter beaches before combat landings, and placed marker beacons. In the Mediterranean and the Philippines, the Beach Jumpers made elaborate simulated landings to fool the enemy as to real locations, including radar and sound deception.

Active in the Mediterranean, Normandy, and the South West Pacific, the Naval Combat Demolition Units cleared beach obstacles in advance of combat landings, and guided landing craft to their destination, while the Underwater Demolition Teams carried out similar tasks in the Pacific theater only. In co-operation (and sometimes competition) with the Office of Strategic Services, Naval Group China gathered intelligence in that theater, and trained and fought with Chinese guerrillas behind Japanese lines.

All these special warfare units played vital roles in the prosecution of the Allied war effort across the globe. Their distinctive uniforms, insignia, special clothing, equipment, and weaponry are illustrated and described in this engaging study.