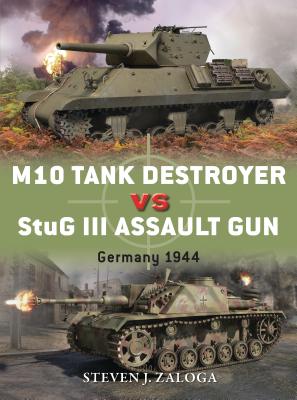 This is book number 53 in the Duel series.

Although tanks like the Sherman and Panther captured the headlines, the Allies' M10 tank destroyer and the Germans' Sturmgeschütz (StuG) III were the unsung workhorses of the northwest European battlefields of 1944-45. While their mission was not principally fighting one another, their widespread use ensured their frequent encounters, from the Normandy bocage to the rubble-strewn streets of Aachen.

The StuG III was the quintessential assault gun: a low-slung, heavily armored, turretless vehicle intended to provide direct-fire support for infantry formations. It was a jack of all trades, being used both for the traditional direct-fire role, but also increasingly for antitank defense; when its armament was improved from a short 75mm gun to the better-known long 75mm gun, it reached its pinnacle and remained largely unchanged from 1943 to 1945. It proved exceptionally valuable in Normandy as its low profile and excellent armament made it a useful infantry support weapon while at the same time it had more than adequate firepower to destroy standard Allied tanks such as the Sherman.

The M10 3in Gun Motor Carriage was originally developed as a tank destroyer. It was based on the Sherman tank chassis but with less armor and a more powerful gun. By 1944, however, its 3in gun proved ineffectual against the most thickly armored German tanks such as the Panther and Tiger. As a result, by 1944, the US Army's M10 battalions were usually deployed in support of US infantry divisions to conduct direct-fire support. Essentially, the M10 became the US Army's principal assault gun in the 1944-45 ETO campaign, whether intended for this role or not.

Widely deployed in roles their designers had not envisaged, these two armored fighting vehicles clashed repeatedly during the 11-month campaign that saw the Allies advance from Normandy to the heart of the Reich. Fully illustrated with specially commissioned artwork, this is the story of their confrontation at the height of World War II.

Steven J Zaloga received his BA in History from Union College and his MA from Columbia University. He has worked as an analyst in the aerospace industry for over two decades, covering missile systems and the international arms trade, and has served with the Institute for Defense Analyses, a federal think tank. He is the author of numerous books on military technology and military history, with an accent on the US Army in World War II as well as Russia and the former Soviet Union.