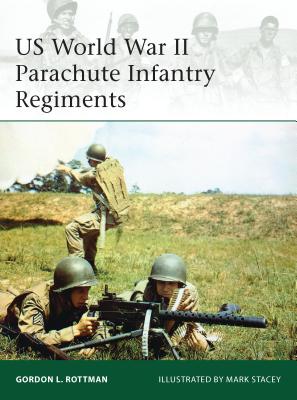 This is book number 198 in the Elite series.

From North Africa, Sicily, and Italy, to Normandy and Holland, the Battle of the Bulge, into the heart of Nazi Germany, and also in jungle battles in the Pacific the parachute infantry regiments were among the most highly decorated US Army units of World War II, and between them they saw action right across the world. The elite nature of these units led to their being committed to action not only in the way that had been intended; their quality tempted commanders to keep them in the line longer than their light armament justified, and they were tested to the limit.

This engaging study traces the story of each of the 17 regiments, from their creation and training in the USA, through their deployments overseas, to their combat jumps and all their battles. It explains their structure and organization, and records their commanding officers and other notable personalities, such as their Medal of Honor recipients. The book is illustrated with wartime photographs, many previously unpublished, and with eight full-color plates detailing the specifics of their uniforms, insignia, and equipment practices - which often differed from unit to unit. Together, these plates offer a comprehensive study of the special clothing and gear worn throughout the US Army's parachute forces.

Mark Stacey was born in Manchester, UK, in 1964 and has been a freelance illustrator since 1987. He has a lifelong interest in all periods of history, particularly military history, and has specialized in this area throughout his career. He now lives and works in Cornwall.
“Gordon L. Rottman details concise unit histories and assimilation into divisions in the 198th volume of Osprey's 'Elite' series.  Coverage also highlights combat uniforms, insignia and personal equipment.  And Mark Stacey's color plates offer superb references for modelers.  Decidedly recommended!” —David L. Veres, www.cybermodeler.com