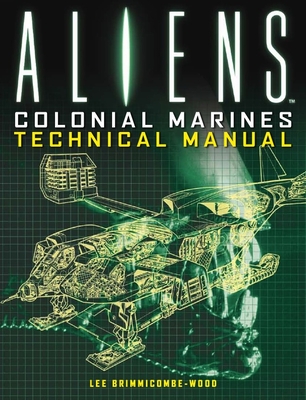 
Backordered
The United States Colonial Marines. Ultimate troubleshooters equipped with state-of-the-art firepower, capable of power projection across the vast expanse of deep space. They can sharpshoot a man at a thousand meters or obliterate an entire world from the safety of orbit. They reckon they are unbeatable.

But on a dirtball colony planet known only as LV-426 the unthinkable happens.

The Aliens - Colonial Marines Technical Manual is your official guide to the equipment and organisation of the United States Colonial Marine Corps. Packed with diagrams, technical schematics and plans, the manual takes a detailed look at the guns, vehicles and ships of the USCMC, and the men and women who use them.

A must-have book for any Aliens fan, the Aliens - Colonial Marines Technical Manual examines the technology of the movie's futuristic nightmare in every detail.
Lee Brimmicombe-Wood is a British designer of computer games and board games, including the award-winning Downtown and The Burning Blue. He is the creator of PC air combat simulators, Ka-52 Team Alligator and Team Apache. He is also the author of Aliens: Colonial Marines Technical Manual. Currently he works as a designer for Guerrilla Games, which is part of Sony Worldwide Studios.
"An open door to the ALIENS universe that offers the curious even more information about the dangerous world of the films." - Suvudu