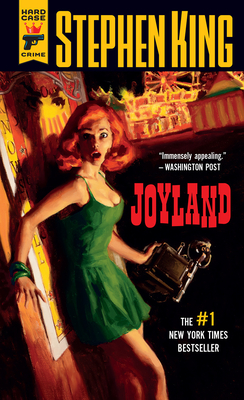 
Not On Our Shelves—Ships in 1-5 Days
A STUNNING  NEW NOVEL FROM ONE OF THE BEST-SELLING AUTHORS OF ALL TIME - NOW OUT IN MASS MARKET PAPERBACK!

Set in a small-town North Carolina amusement park in 1973, Joyland tells the story of the summer in which college student Devin Jones comes to work as a carny and confronts the legacy of a vicious murder, the fate of a dying child, and the ways both will change his life forever.

"I love crime, I love mysteries, and I love ghosts. That combo made Hard Case Crime the perfect venue for this book, which is one of my favorites. I also loved the paperbacks I grew up with as a kid, and for that reason, we’re going to hold off on e-publishing this one for the time being. Joyland will be coming out in paperback, and folks who want to read it will have to buy the actual book." – Stephen King
Stephen King was born in Portland, Maine in 1947, the second son of Donald and Nellie Ruth Pillsbury King. He made his first professional short story sale in 1967 to Startling Mystery Stories. In the fall of 1973, he began teaching high school English classes at Hampden Academy, the public high school in Hampden, Maine. Writing in the evenings and on the weekends, he continued to produce short stories and to work on novels. In the spring of 1973, Doubleday & Co., accepted the novel Carrie for publication, providing him the means to leave teaching and write full-time. He has since published over 50 books and has become one of the world's most successful writers.

Stephen lives in Maine and Florida with his wife, novelist Tabitha King. They are regular contributors to a number of charities including many libraries and have been honored locally for their philanthropic activities.
"Joyland is one of Stephen King’s best novels." - Horror Movie Reviews

"This book is one of those thrills we come across every so often when least expected!" - Hellnotes

"Set in a dying amusement park in the south, Joyland features a ghost and a serial killer, but the real heart of the novel is a coming of age story, one that took me vividly back to my own youth, working the rides at Uncle Milty's in Bayonne." - George R.R Martin

"Joyland is full of nostalgia and some really sweet moments that had me tearing up. It's easy to forget that anything else is going on, you're so wrapped up in the lives of these characters.
4.5 out of 5 Stars (read it, read it now)" - Only The Best SciFi


"This one’s a must for King fans and may also attract YA readers." – Library Journal

"An amusement park and murder figure into a coming-of-age tale in this miniature thriller with a hint of the supernatural." – Los Angeles Times

“Undeniable…charm [and] aching nostalgia…[JOYLAND] reads like a heartfelt memoir and might be King’s gentlest book, a canny channeling of the inner peace one can find within outer tumult.” – Booklist

"Wrapped in a gloriously pulpy cover, Joyland is a coming-of-age story set in 1973 at a North Carolina amusement park -- creepy! -- that's haunted by a murderer." – Time Magazine

“King's latest thriller, a PG-13 pulp paperback crime novel takes place at a remote carny park where college kid Devin is desperate to see the ghost of a girl whose murderer might still be
lurking around the hot dog stands.” – Cosmopolitan Magazine

“Joyland is a joy. A gem whatever its genre.” – Tor.com

"This is a wonderful return to old school King." – We Love This Book

"Joyland is a fantastic story. This is a compelling and yet oddly gentle tale of a young man experiencing the ache of heartbreak and the curve-balls life can throw at you." – Geek Native

"From horror authority Stephen King comes some hard-boiled action, with all the elements of a good crime novel—including the early ’70s, southern secrets, carnivals, and a meddling college kid." – The Daily Muse

"This Joyland is not innocent, of course. Its retro thrills include an enticingly steamy cover, Hard Case Crime’s sensually tactile paperback format, and a cover line that asks, “Who Dares Enter the Funhouse of Fear?”" – New York Times

“It’s good to have a book like this now – simple, sweet, and not a little scary – to remind us that among the prequels and sequels, the epics and the TV miniseries, Stephen King can still spin one hell of a little yarn.” “As usual, King slips in and out of genre effortlessly, but it’s gratifying that at the core of Joyland exists a story worthy of being called a Hard Case Crime.” “Misdirection and red herrings abound, delightfully, and the weather-ravaged denouement could play out as the conclusion to a Donald Westlake or Lawrence Block novel.” – FEARnet

“This is a Stephen King novel that you can start on your vacation and actually finish before the flight home.” – Men’s Health, Selected By Amazon

"This is Stephen King at his emotional best." – Florida Times-Union

“It is easy to connect with Devin as well as many of the secondary characters as King develops this descriptive, entertaining tale of personal growth and murder.” –
Luxury Reading

"Joyland is pretty much perfect in its pursuit of diversion." “This story of a broken  heart, a summer job and a beach amusement park — infused with ghosts, killers and a boy with "the sight" — is lovingly streamlined. It starts strong, ends stronger. Sturdy finales are never a given with King, but this one, Constant Readers, will have you gasping and, ultimately, blinking back big fat tears." "The ultimate "beach" book from one of literature's slyest entertainers." – Tampa Bay Times

“As you read the dialogue, the book becomes less a story about a summer’s mystery than a tale of entry into another, coexisting world, one with its own rules, codes, and language.” “The splashy and aggressively sexy packaging is the tip of the iceberg.” – LA Review of Books

“[a] fun book with a touch of winter’s chill around the edges” Tor.com