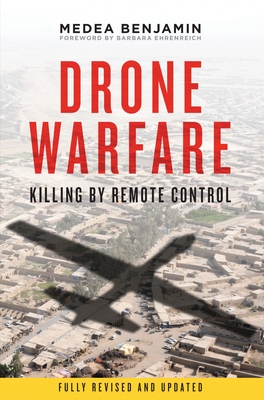 
Special Order—Subject to Availability
Drone Warfare is the first comprehensive analysis of one of the fastest growing—and most secretive—fronts in global conflict: the rise of robot warfare. In 2000, the Pentagon had fewer than fifty aerial drones; ten years later, it had a fleet of nearly 7,500, and the US Air Force now trains more drone “pilots” than bomber and fighter pilots combined. Drones are already a $5 billion business in the US alone. The human cost? Drone strikes have killed more than 200 children alone in Pakistan and Yemen.

CODEPINK and Global Exchange cofounder Medea Benjamin provides the first extensive analysis of who is producing the drones, where they are being used, who controls these unmanned planes, and what are the legal and moral implications of their use. In vivid, readable style, this book also looks at what activists, lawyers, and scientists across the globe are doing to ground these weapons. Benjamin argues that the assassinations we are carrying out from the air will come back to haunt us when others start doing the same thing—to us.
Medea Benjamin is a cofounder of the peace group CODEPINK and the international human rights organization Global Exchange. A former economist and nutritionist with the United Nations and World Health Organization, she is the author or editor of eight books. Her articles appear regularly in publications such as the Huffington Post, CommonDreams, AlterNet and OpEd News.

Barbara Ehrenreich is the author of fourteen books, including the bestselling Nickel and Dimed and Bait and Switch. She lives in Virginia.
“In this remarkably cogent and carefully researched book, Medea Benjamin makes it clear that drones are not just another high-tech military trinket. Drone Warfare sketches out the nightmare possibilities posed by this insane proliferation.” —Barbara Ehrenreich

“The first book that reveals the vocal international citizen opposition that challenges the legality and morality of America’s extrajudicial execution drones before they kill here at home.” —Ann Wright, US Army colonel (ret.) and former deputy chief of mission for US embassies in Afghanistan, Uzbekistan and elsewhere

“A compelling mix of humanity and factual data.” —Foreign Policy in Focus

“Thoroughly researched, hard-hitting ... so very timely, and so very much needed.” —Tikkun