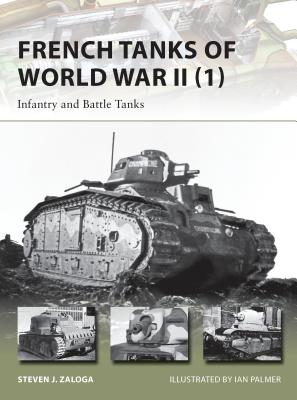 This is book number 209 in the New Vanguard series.

The first volume of this two part series will cover the infantry tanks and battle tanks that served in 1940. Starting with the Renault FT of World War I fame, it will cover the modernization of the FT in the inter-war years. The focus of the infantry tank section will be on the attempts to replace the FT with designs such as the Renault R-35, FCM-36, and the Hotchkiss H.38. Derivatives of these types will also be covered such as the R-40. France also had a separate family of battle tanks starting with the Renault D-1, Renault D-2, and finally the best known tank of the campaign, the Char B1 bis. This book will provide a brief development account these tanks types, covering the tactical rationales for their design and their basic technical features. It will also briefly address their performance in the 1940 campaign, pointing out the salient features of the combat record.

Steven J. Zaloga received his BA in History from Union College and his MA from Columbia University. He has worked as an analyst in the aerospace industry for over two decades, covering missile systems and the international arms trade, and has served with the Institute for Defense Analyses, a federal think tank. He is the author of numerous books on military technology and military history, with an accent on the US Army in World War II as well as Russia and the former Soviet Union. The author lives in Abingdon, MD.